“We have a great group of young guys who I think would welcome an opportunity to play alongside Plaxico as well as they welcome the challenge of running alongside Hines Ward.” — Ben.

From Ed Bouchette at the Pittsburgh Post-Gazette today: 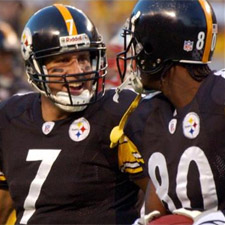 Ben Roethlisberger laughed today over James Harrison’s comments in Men’s Journal that he was no Peyton Manning, but says it’s no laughing matter about trying to get receiver Plaxico Burress to rejoin the Steelers.

The quarterback said he has been lobbying Plaxico for the past two months to consider re-signing with the Steelers, who drafted him in the first round in 2000.

“I’ve been talking to him,” said Roethlisberer, who was a rookie during Burress’ final season with the Steelers in 2004. “Plax and I have been talking for the last couple of months. I talked to him the other day and said, ‘Would you be interested?’ I’m excited for him to come whenever he comes here.”

Ben talks to the media…


“We were joking literally that day, talking about it because no one’s going to be harder on me than I am.” — Ben, on his discussion with James Harrison over magazine comments earlier this month.

After Friday morning’s walk-through, Ben took some time to talk with the media before lunch.


Check out the video of his interview here.