Cast your vote for “The Moment”

Home/News/Cast your vote for “The Moment”
Previous Next

Cast your vote for “The Moment”

Sports Illustrated is unveiling its list of the Most Decisive Moments over the course of the past 44 Super Bowls, presented by Bing: 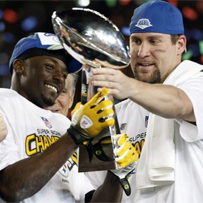 Most games come down to one play, one decision, one moment that decides the outcome. SI has selected the most pivotal moments in Super Bowl history and they want you to select the winner. There are three rounds to the voting and no limit to how many times you can vote.

Round 1 began today and runs through January 18th. Round 2 begins on January 19th and ends January 25th.

The Championship Round begins January 26th and ends February 3rd.

The Winning Moment will be announced on February 4th.

There are two recent Steelers Super Bowl “moments” among the list:

Getting the ball on an apparent reverse around the right end, wideout Antwaan Randle El throws on the run and hits Hines Ward in stride for a 43-yard touchdown to give the Steelers a two-score lead with just over nine minutes left to play. It’s the first touchdown pass thrown by a wide receiver in Super Bowl history.

Surrounded by three defenders in the back corner of the end zone, Santonio Holmes pulls down Ben Roethlisberger’s perfect spiral and, using his tiptoes like a ballerina, keeps both feet inbounds to score the winning touchdown with 35 seconds left to play. The 6-yard reception – one of nine totaling 131 yards – earns Holmes MVP honors.


You can check out all of them and cast your votes here.