Home/News/Congratulations to Brett Keisel!
Previous Next

“Keisel is one of the most caring, giving human beings you will ever come across and that is why it came as no surprise he was the recipient of the Andy and Cindy Russell Humanitarian Award, presented on Thursday night at the UPMC Celebrity Classic.” — Teresa Varley.

More from Ms. Varley on this much deserved award: 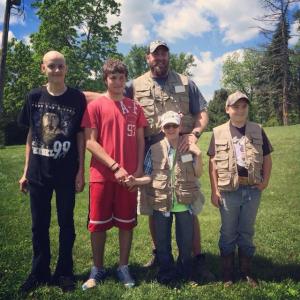 If you know Brett Keisel, or even have met him once, there is something you immediately notice.

And no, I am not talking about his amazing beard.

I am talking about his heart.

The award, named after the former Steelers linebacker and his wife, has been given the last three years to someone who has made a huge impact on the Pittsburgh community. Late Steelers Chairman Dan Rooney was the first recipient and Rocky Bleier the second.

“It’s pretty surreal,” said Keisel, who owns Mighty Oak Adventures. “My kids were asking me what this is for. I told them it’s about giving back to the community. To see the men who won it in front of me, Mr. Rooney and Rocky, it’s a tremendous honor to be mentioned with those guys and what they have done for this city. I am honored to be here. It’s a special night.”

Steelers President Art Rooney II was on hand to present Keisel with the honor, something that was special for him.

“Brett is one of those guys who has done so much off the field for so long it’s hard to keep track of everything,” said Rooney. “His ‘Shear Da Beard’ event for Children’s Hospital has become a legendary event in town. I am happy to be a part of this and honored to present him the Andy and Cindy Russell Humanitarian Award.”