From Jason Cato at the Pittsburgh Tribune-Review this evening: 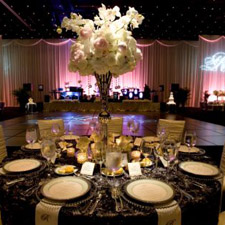 Big Ben’s wedding is proving to be the event that keeps on giving. At least for the next few days.

Floral arrangements made from flowers used for the wedding and reception of Steelers quarterback Ben Roethlisberger and his bride, the former Ashley Harlan, were delivered to the Ronald McDonald House and Children’s Hospital of Pittsburgh, both in Lawrenceville, as well as the Children’s Home of Pittsburgh in Bloomfield and The Children’s Institute in Squirrel Hill.

“There were a lot of them,” said Rachel Check, owner of Hepatica, the Regent Square florist the Roethlisbergers hired. “That’s why so many people were able to enjoy them.”

Flowers used in the wedding and reception included roses, orchids and hydrangeas.

Hepatica regularly donates arrangements to hospitals and charities after events and weddings, but Check said leftovers from Saturday’s wedding provided more than usual. She declined to say how many arrangements were delivered this week.