Cowher: ‘It’s amazing, but not surprising’

Home/News/Cowher: ‘It’s amazing, but not surprising’
Previous Next

Cowher: ‘It’s amazing, but not surprising’ 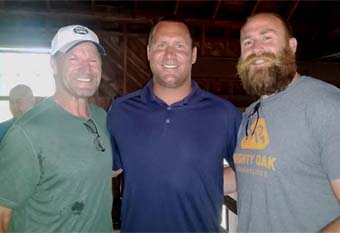 On the day Ben Roethlisberger was drafted, former Steelers’ Coach Bill Cowher made a comment that would hold more than true when he said, “This kid has a lot of upside.”

As Roethlisberger is on the doorstep of his 13th NFL season, Cowher smiles when he thinks of how far he has come and how much upside he really had.

“It is amazing, but not surprising,” said Cowher, an analyst on The NFL Today on CBS. “It’s great to see where he is in his career. You look at him, he looks like he is in great shape. He is in a great place. He is without a doubt the face of this football team. He has accepted that responsibility. He is an elite quarterback. He is a special player. He has a special skill set. With him on your football team, you have a chance every Sunday.”

Cowher knows that as Roethlisberger goes, the Steelers go. But at the same time, he knows he is going to have to depend on the wealth of talent around him, from the offensive line, to receiver Antonio Brown, to running back Le’Veon Bell. They are all ingredients that can lead to a successful season for the black and gold.

“With this offense, you are talking about a pretty good offensive line,” said Cowher. “David DeCastro might be one of the best guards in the league and we all know it starts up front with them. Ben will be the first to tell you that. Antonio Brown is, if not the best receiver in the league, one of the best. Le’Veon Bell, as we have seen through the years when healthy, is such a dynamic player not just out of the backfield, but as a receiver.

“You couple that with a quarterback that has a great feel for the game, great vision for the game, who can see the field and is so resourceful. His improvisation is second to none. You put talent around him there is no limit to this offense. This is a team that is not just about playoffs, they are measured by championships which they should be.”