Cowher on Ben: ‘He’s Having A Lot Of Fun Playing The Game’

Home/News/Cowher on Ben: ‘He’s Having A Lot Of Fun Playing The Game’
Previous Next

Cowher on Ben: ‘He’s Having A Lot Of Fun Playing The Game’

“He is playing really good football. He’s not forcing things. It’s a very unselfish group of receivers, you don’t hear anybody yelling, wanting the ball. He has just been able to sit there and take what the defense has been giving him and I think he’s having a lot of fun playing the game.” — Bill Cowher. 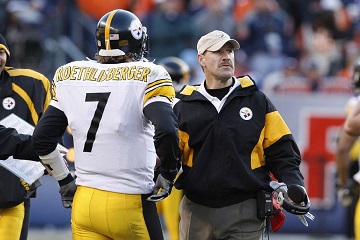 Fresh off a 38-29 win over the Philadelphia Eagles last week, the Steelers sit atop the AFC North thanks to an unblemished 4-0 record. The defense has been strong and the offense has been rolling right along thanks to the return of quarterback Ben Roethlisberger.

After missing last season with an elbow injury, it was uncertain what the team would get out of the 38-year-old QB this season. Thus far, it’s been a career-best completion percentage (69.9%), touchdown percentage (7%) and interception percentage (0.7%). Though he’s topped 300 yards just once, but he hasn’t had to get into shootouts because of the strength of the defense.

“Sometimes, you don’t appreciate something until it’s been taken away from you. What happened last year is, football was taken away from him,” said Cowher in an interview with CBS Local’s Ryan Mayer. “He sat on that sideline and watched a team that really transformed from an offensive team into a defensive team when they picked up Minkah Fitzpatrick, harnessed Bud Dupree and T.J. Watt, they got Tuitt back this year, he was out last year. Devin Bush is in his second year. It’s a very solid defense. And, all of a sudden, he sees these young receivers and he’s coming back into it with a renewed freshness and new perspective on things and a chance to do this again.”

That perspective, combined with an enviable arsenal of weapons at receiver and a solid offensive line have played a big part in Roethlisberger’s hot start to the season.