Home/News/Determination paid off…
Previous Next

for fan Heather Scott when it came to finding a way to meet her favorite player! She recently found the website on Twitter and wanted to share her story with other fans:


I’m a lifelong Steeler fan, born and raised in Johnstown, PA. Serving in the Air Force relocated me to Tinker AFB where I also found my second home, Oklahoma, where I started a family and still reside today. I wear my love for the Steelers on my sleeve, meaning after a 15 minute encounter with me you will know exactly how much I LOVE my Steelers. 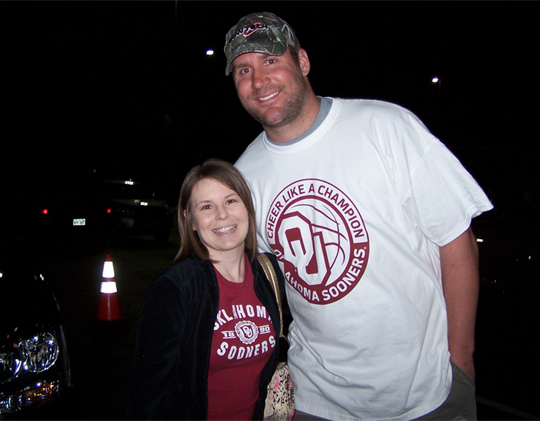 On March 2, 2011, Ben’s birthday, my son Karsten’s soccer coach messaged me about Senior Night at Oklahoma University (where Ben’s sister Carlee was a basketball star). I thought “if Ben were going to be at a game, THIS was going to be the game”. So I asked my friend Linda to go to the game with me and (of course) had to call my family in PA to tell them what I was up to. Most responses were “Ben doesn’t sign autographs” or “even if Ben’s there, no way you’ll be able to get to him”… but that wasn’t going to slow me down. I was determined and if he was here in Oklahoma, by golly, I was going to meet him!

We sat across from the OU bench, and I scanned the crowd for any sign of Big Ben. I saw a really big guy with a blonde woman on his arm enter the arena from the tunnel and make their way to the press table. I spent the entire first half determining whether that really was Ben, but when I saw him sign a jersey for someone, BAM! I knew it was Ben for sure AND he gave an autograph! (HA! in your face Uncle Jim!) Well adrenaline kicked in and I made my way to Guest Services, where I explained that I was from the Burgh area, had my terrible towel, and asked if they could possibly get it to him to sign. Yeah… Not quite. They didn’t budge and in fact tried to act like it wasn’t Ben. I wasn’t giving up. I asked if they knew anyone else that could possibly help me. Surprisingly they directed me to a gentleman in a suit standing just down the hall. Although he empathized, he said as an OU employee he could not take me to Ben, nor take anything to him for an autograph. He explained that Ben didn’t want his attendance announced as he didn’t want to take away from his sister’s Senior Night. BUT this gentlemen understood my plight, and who knew, he was from Pittsburgh too! He suggested I try to meet Ben outside of the arena. 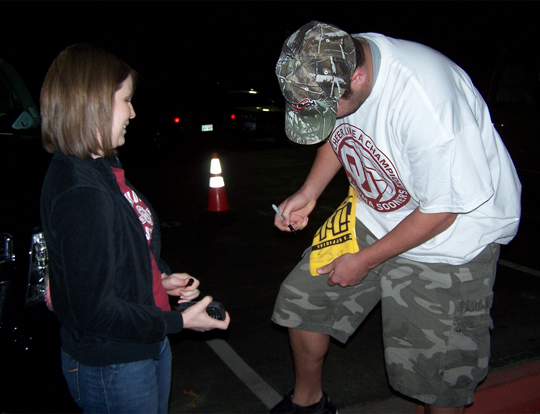 We stayed through Carlee’s senior tribute, then headed to the parking area. Just as I came around the corner of the building, he and Ashley were headed in my direction from the opposite side. Once he got close enough I kindly asked if he’d “do a Pittsburgh gal a favor and take a picture with me.” At least that’s what my friend said I said (lol).

Ben was so nice to stop, and said “Sure, come on”. My heart was beating a million miles a minute. I could not believe it! I hopped on over and put my small arm around him – I’m pretty sure squeezing his side way too tight, and had the biggest smile on my face! After we took the picture, I asked if he’d sign my terrible towel to which he replied “Sure!” He signed my towel, handed it back to me and said “Here you go.” I thanked him and he said “You’re very welcome. Have a nice night!”

I was literally jumping in the air and kicking my heels together! I was so excited for weeks… I still get excited re-telling the story. He and Ashley were so kind and gracious to take a moment to speak with me, on his birthday no less. — Heather Scott


You can see another photo from that evening here.


*Thank you to Heather for sharing her story and her photos!!