“He’s an extra-large version of Rodgers.” — Miami Dolphins linebacker Cameron Wake on Ben, from the article below.

From the Miami Sun-Sentinel this afternoon: 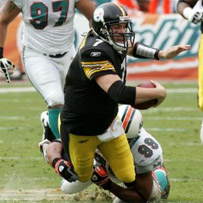 Cameron Wake reached out with his left hand last Sunday and sacked Green Bay’s Aaron Rodgers by the ankle from a prone position.

What are the chances of Wake pulling off another one-handed takedown this weekend against Steelers quarterback Ben Roethlisberger?

At 6 feet 5 and 241 pounds, Roethlisberger has his Packers counterpart by three inches and more than 20 pounds.

“He’s a big joker,” Dolphins linebacker Channing Crowder says. “You grab Roethlisberger’s ankle, he’s going to kick you in the head and take off running.”

“It’s a double-edged sword,” Roethlisberger says. “You live by it and die by it. We got some big plays from it, and we got some big negative plays from it. People ask me why I don’t go down, but I think it’s just my competiveness.”

That mental clock, the one that tells quarterbacks when it’s time to get the ball out? Big Ben’s moves way slower than most others.

“I don’t want to give up on any play,” he says. “Maybe sometimes I should, but it’s just hard to tell me to do that.”

Some of Roethlisberger’s greatest plays have featured him shrugging off pass rushers the way a horse sheds flies, then firing downfield to beat a secondary that can’t possibly hold up that long in pass coverage.

It happened on the game-winning pass to Santonio Holmes in the Super Bowl two years ago against Karlos Dansby’s Cardinals. It happened to the Dolphins in January in a 30-24 season-ending loss.

Big Ben went down three times in that game, but it could have been several more.

“We had some opportunities to get him down and we didn’t get him down,” Dolphins coach Tony Sparano says. “He can kill you when that doesn’t happen. We’ve got to get this guy down on the ground.”

“He looked comfortable. A couple of throws went where he didn’t want, but overall I would think he had to be pretty pleased. He’s one of the five best quarterbacks in football. What would you expect?” — HOF player and CBS Sports color commentator Dan Dierdorf on Ben’s performance last Sunday (ESPN).