Ebron: ‘I have always had this love for Big Ben’

Home/News/Ebron: ‘I have always had this love for Big Ben’
Previous Next

Ebron: ‘I have always had this love for Big Ben’

“You never hear anything bad about Pittsburgh. No matter who I talked to, former players, players who are there now, they all told me the same thing. It’s fun to be here. You can be yourself” — New Steeler Eric Ebron.

From his interview with Teresa Varley, Steelers.com: 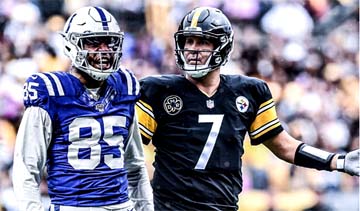 I didn’t need to see Eric Ebron’s face during our call on Wednesday morning to know he was smiling.

It was in his voice, in the energetic way he talked about his new team, in the passion he had answering every question I asked him.

He can’t wait to join his new teammates, which is on hold for now, including many that he already knows like Joe Haden and JuJu Smith-Schuster. And he especially is looking forward to getting to know quarterback Ben Roethlisberger. Ebron has always admired Roethlisberger’s on-field talents, something he even tweeted about two years ago, after watching Steelers games at the home of one of his high school football coaches.

“I am excited. I can’t wait. Ben has earned so many stripes in this league. You know you are playing with a guy who is a winner. He is a fighter. He has played through so many tough injuries, done things to will his team to win, and won two Super Bowls. It’s going to be fun to get to learn from him. I came from two really good quarterbacks, Matthew Stafford and Andrew Luck, who has a genius mind. For me to go to Ben Roethlisberger who is like them as far as competing and willing their team to victory is fun.”

His goal is once the time comes for him and Roethlisberger to work together that they can build a relationship and level of comfort that he can be a go-to guy for the offense.

“I hope to be that safety blanket, that go-to, that loved tight end that everybody wants,” said Ebron. “That is all you hear. That Ben loves his tight end. It’s going to be pretty cool to see what we can do together. I have been texting him asking him as many questions as I can as early as I can. I want to pick his brain. If I can be his best friend and we can think the same, good things happen. That is really all I am trying to do.”