ESPN: Ben and the HOF debate

Home/News/ESPN: Ben and the HOF debate
Previous Next

ESPN: Ben and the HOF debate 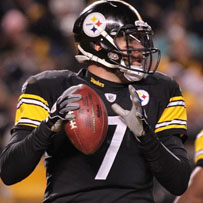 In February we explained that three Super Bowls victories for starting quarterbacks leads to automatic enshrinement into the Hall of Fame. The only quarterbacks in that class are Joe Montana, Terry Bradshaw, Troy Aikman and Tom Brady. Three are in Canton and one — Brady — will be a first-ballot Hall of Famer five years after he retires.

So what does this mean for Roethlisberger’s Hall of Fame chances? It means he still has some winning to do.

Roethlisberger’s 10-3 record in the postseason speaks volumes. His .769 winning percentage in the playoffs surpasses both Brady (.737) and Manning (.473). Roethlisberger also compares favorably with Hall of Fame inductees of the past 10 years in key areas such as passer rating (92.5), completion percentage (63.1) and yards per attempt (8.0)…