Today, Ben announced the final grants to be awarded from the Ben Roethlisberger Foundation at The Giving Back Fund.

The Foundation is distributing 15 grants to police and fire K-9 programs around the country.

The Foundation will distribute more than $90,000 this year. Grant funds will be utilized in a variety of canine-focused initiatives including the establishment of new K-9 units, replacement of retiring dogs, purchase of safety and training equipment, and training and certification of new and existing K-9s among other K-9 related expenses.


“It has been an absolute privilege to be able to support the critical work of K-9 officers and their handlers over the past 14 years. To witness the bond between a dog and their handler has been very rewarding. Their lifesaving & crimefighting gives ‘teamwork’ new meaning. They are truly partners! I have many fond memories of meeting first responders on the field and in our communities and I want to thank them for their dedication and sacrifice.” –Ben.

For the past 14 seasons, The Ben Roethlisberger Foundation has invited police and fire departments located in and around the cities and communities in which the Steelers played to submit proposals detailing their needs. The mission of the foundation focused on supporting K-9 units of police and fire departments throughout the United States, with a particular emphasis on service dogs in Pittsburgh, PA. Ben has distributed more than $2.3 million since 2007, nearly $2 million of which has specifically benefited K-9 programs. In addition, he has hosted several events to benefit the Make-A-Wish Foundation, his high school alma mater, and other organizations close to his heart. 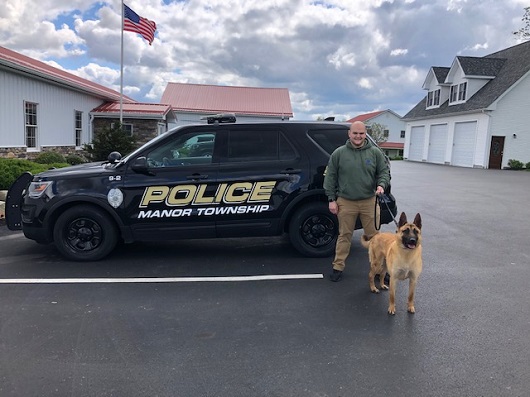 Donald W. Palmer, Jr., Chairman of the Manor Township Board of Supervisors, remarked, “The Police Department is excited and appreciative to receive this grant funding from the Ben Roethlisberger Foundation. Manor Township’s new K-9 program is projected to cost approximately $91,000 to launch, and this grant will help substantially with achieving that goal. The Ben Roethlisberger Foundation has accelerated the execution of the K-9 program and the positive impacts a K-9 will have in the reduction of crime and drug trafficking in our communities. We anticipate that the K-9 unit will help us build and maintain trust and socially acceptable relationships with our residents and serve as a mentoring tool for reaching troubled youth. I would also like to introduce you to “Atom” (above) our new Police K-9. He is 12 months old and will begin training with the instructors immediately, and then the handler and the K-9 will train together for 6 weeks beginning on June 26th.”

Allegheny County Chief Deputy Kevin Kraus said, “K-9s of the Allegheny County Sheriff’s Office are invaluable to the community. In addition to rescuing dementia patients and suicidal individuals, they apprehend dangerous fugitives and protect Allegheny County court facilities through explosives and narcotics patrols. It is imperative the Sheriff’s Office maintain the overarching health, safety and well-being of its beloved K-9s during active service years and in retirement. The generosity of the Ben Roethlisberger Foundation will ensure our K-9s, largely aided with donations and grants, continue to receive the high-quality care they deserve. Since its inception, the Ben Roethlisberger Foundation has done tremendous work to support K-9 units throughout the country. We are deeply honored to be part of this dynamic program devoted to the function and welfare of public safety service animals.”

Findlay Fire Chief Josh Eberle said, “It’s exciting to add Ben’s name to the list of funding partners for our project. The STRICT Center will be an innovative training facility that will benefit all fire and law enforcement agencies in Findlay and Hancock County, so it aligns perfectly with the values of the Ben Roethlisberger Foundation.”

Brian Pearson, President of the Girard Professional Firefighters Association, offered, “The City of Girard Fire Department extends a warm thank you to the Ben Roethlisberger Foundation for their generous grant award. The funding will go a long way towards sustaining our K-9 Arson Unit which began last fall with the acquisition of an accelerant-detecting K-9. In a short time, Maya has proven herself an asset to the City of Girard and the surrounding region. These funds will ensure that we can continue to meet our vital mission.”

Police Sergeant Corey King said, “The Redondo Beach Police Department would like to express our gratitude for the generous grant awarded to our K-9 program by the Ben Roethlisberger Foundation. The funds will contribute to continuing our department’s vision, ‘We Are the Community – Leading the Way in Law Enforcement.’”

Sheriff David Groves stated, “The Cherokee County Sheriff’s Office is excited and honored to receive this grant from Ben Roethlisberger’s Foundation. Knowing Ben has family who calls our county home makes this award even more special as our K-9 Teams, who are committed to keeping the community safe, will be better enabled to do so thank to his generosity.”

Police Chief Matt Conrad said, “The Punxsutawney Borough Police Department is grateful for the donation from the Ben Roethlisberger Foundation. Our K-9 program has been completely funded through private donations and relies on the generosity of others. In the short time that our K-9 program has been established it has had a positive impact on Punxsutawney Borough along with the surrounding area. Mr. Roethlisberger’s generosity and love for animals will ensure the future success of the K-9 program in Punxsutawney.”

Covington Chief of Police Robert Nader stated, “K-9 Ernie started working for our team in June 2012 and began his retirement on October 9, 2020. Unfortunately, Ernie was not able to enjoy his retirement very long, as his sickness worsened and was laid to rest on January 29, 2021. During his eight and half years of service, he was a reliable and dedicated officer, always eager to start his shift to help make our community safer. After reaching out to our K-9 friends, we were able to find his replacement, Duke, in early October. The funding awarded to us from the Ben Roethlisberger Foundation will help pay for Duke’s training, kenneling, food, veterinarian visits, and also help our other two K-9 partners, Holly and Dino. I would like to thank Big Ben for his continued support of the four-legged police officers across our nation and for the support of the Covington Police Department K-9 Unit in its 52nd year of service.”

North Fayette Township Police Chief Donald Cokus stated, “On behalf of North Fayette Police Department, I would like to thank the Ben Roethlisberger Foundation for selecting our department as one of its grant recipients. With the support of this grant, our department’s K-9 program will be able to continue to serve our community with success. We thank the Ben Roethlisberger Foundation at The Giving Back Fund for its continued support.”

East Cleveland Police Chief Scott P. Gardner said, “We could not be more excited to announce that the Friend’s of the East Cleveland K-9 Fund is a recent grant recipient from the Ben Roethlisberger Foundation. Currently operating with one K-9, these funds will go a long way in the procurement of our second K-9. The Department would like to thank the Foundation for its support of police K-9 units everywhere.”

For more information about The Ben Roethlisberger Foundation or The Giving Back Fund, please contact Jessica Duffaut or visit Ben’s foundation page or www.givingback.org.