…just in case there is an extended lockout by NFL owners –


From the Pittsburgh Post-Gazette‘s Ed Bouchette this morning: 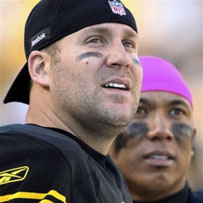 Hines Ward and Ben Roethlisberger have discussed having some minicamps on their own for the quarterbacks and receivers in the spring.

“Ben and I discussed it. He talked about getting together with the wide receivers,” Ward said.

They suggested meeting at different spots — all gathering in Pittsburgh and then all gathering in the hometown of each receiver for various workouts. Ward said no plans were made, just discussed. But if the spring drills known as OTAs are affected, the players want to do something.