Foster on Ben: ‘He never seems to get credit’

Home/News/Foster on Ben: ‘He never seems to get credit’
Previous Next

Foster on Ben: ‘He never seems to get credit’

From Ramon Foster for DKSports.com: 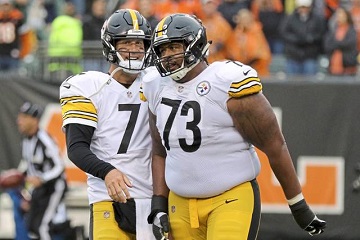 Ben Roethlisberger is a future Hall of Famer. I don’t think anyone will dispute that statement. He’s part of the current golden generation of quarterbacks along with Tom Brady, Drew Brees and Aaron Rodgers. They are the Rolling Stones of NFL signal-callers. Each one is a Super Bowl champion. Each one is a multiple Pro Bowl selection.

But when it comes to the Associated Press NFL Most Valuable Player award, the Steelers’ franchise quarterback has received scant recognition. Heck, he’s never even been named All-Pro first or second team.

Did you know that?

Some Steelers fans probably are wondering about the MVP snub despite all the winning seasons and three trips to the Super Bowl. Well, Big Ben is in silent attack mode this year. Trust me on that. The Steelers are 3-0, and look like a contender reborn after he missed much of last season with the elbow injury.

We’re used to seeing our Steelers overshadowed for major awards, except when it comes time to hand out the gold blazers in Canton. Seriously, you’re telling me Chuck Noll was never worthy of one Coach of the Year honor? Crazy.

Note to the national media: There’s a team on the western side of Pennsylvania with all of the makings of a Super Bowl champ. And it’s being led by the ageless Roethlisberger.

No doubt, the defense is getting headlines, and rightfully so. But let’s not overlook a quarterback with a long history of being overlooked during awards season.

Big Ben has earned a reputation for being a backyard gunslinger, someone who takes a pounding to extend plays. That’s all good, but let’s not ignore the production. He never seems to get credit for dicing defenses like a 3-star Michelin chef. It’s just characterized as “Ben doing Ben things” and never much more .

I know it’s early, but his 105.2 passer rating is higher than any rating with which he’s finished a season. His touchdown-to-interception ratio is 7-to-1. I’m not oblivious to the outstanding starts of Russell Wilson and Josh Allen. We know Patrick Mahomes and Lamar Jackson, the last two league MVPs, are going to get their love, too.

True, Big Ben is a six-time Pro Bowler, but the only major award he’s been given is AP Offensive Rookie of the Year in 2004. For the longest time, it was always Peyton Manning, Rodgers and Brady being lavished with the big honors.

Roethlisberger always seems to catch flak for asking management for wide receivers and tight ends, as if the other premier quarterback aren’t stacked with playmakers. My goodness, look at the Chiefs’ roster. You could make the argument Baker Mayfield has been surrounded with more weapons than Big Ben the past two years.

But this season might be different. The Steelers have a nice group of receivers and tight ends. They have produced a 100-yard rusher in all three games. I think we’re going to see the best of Big Ben this season.

Yeah, the Chiefs, Ravens and Bills are getting all the attention right now. Even the Browns and their run-heavy offense are getting some pub with a 3-1 start. The Steelers are flying under the radar, but they are much better than a year ago and it wouldn’t be a shock to see them win the AFC North.

In Pittsburgh, the “Standard is the standard” as Mike Tomlin always says. The big goal is to win the Super Bowl. With a highly motivated Big Ben, the Steelers are going to be in that conversation.

When the dust settles, I want to be the one saying I told you so. Pittsburgh thrives on being considered a lesser team in the national media’s eyes. The Steelers embody the blue-collar, fight-to-the-very-end city. It’s the only place I know where women will put their dudes’ necks in a vice for going out after a loss and enjoying a drink at the bar. It’s comical, but true.

I think there’s a good chance these Steelers enjoy a great season. And if that’s the case, Big Ben should be a frontrunner for league MVP.