Today, Ben announced the tenth, eleventh & twelfth grants of the 2015-16 season from the Ben Roethlisberger Foundation at The Giving Back Fund. 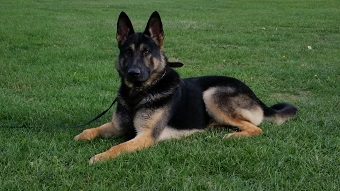 Aurora PD has just recently re-established their K-9 unit with the addition of K-9 Nero (in the photo) and plans to use the funds to finish Nero’s training and outfit him with a bulletproof vest.

“The Aurora Police Department is extremely grateful to the Ben Roethlisberger Foundation for their generous contribution toward the purchasing of K-9 Nero who will make a great addition to our department. On behalf of all of law enforcement, we are grateful to have organizations such as the Ben Roethlisberger Foundation that provide continued support to law-enforcement entities across the country.” — Aurora Chief of Police Brian Byard.

Richmond Heights PD is also hoping to re-establish their K-9 unit and will continue fundraising efforts.

Meanwhile, Cleveland Metroparks Ranger Department will utilize the grant to update the “hot-n-pop” system in one of their K-9 vehicles. The system allows for remote door operation and heat alerts, ensuring the safety of the K-9 when left in the vehicle.

This marks the ninth season that the Ben Roethlisberger Foundation has distributed grants to K-9 units. Ben’s mission is to support K-9 units of police and fire departments throughout the United States, with a particular emphasis on support for service dogs in Pittsburgh, PA. Roethlisberger and the Foundation also support Make-A-Wish.


For more information about Ben’s foundation or The Giving Back Fund, please contact Jessica Duffaut or visit www.givingback.org.