From our Camp Parents & Grandparents…

From our Camp Parents & Grandparents… 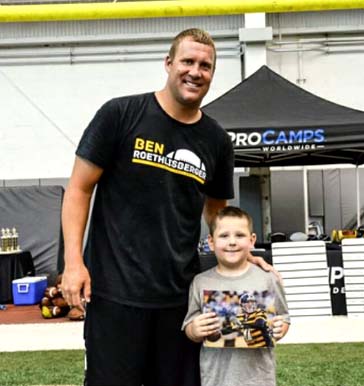 “My son Camden had a blast and learned alot! Ben and his family were absolutely great! And the Rooney’s thanks for letting Ben use the indoor practice field!!! It saved alot of us parents and grandparents from that heat!! Lol.. All in all it was a wonderful experience and a great way to spend Father’s Day!! We will be attending Ben’s future youth camps no doubt about it! #ClassActOnAndOffTheField” — Shawn Coulson. 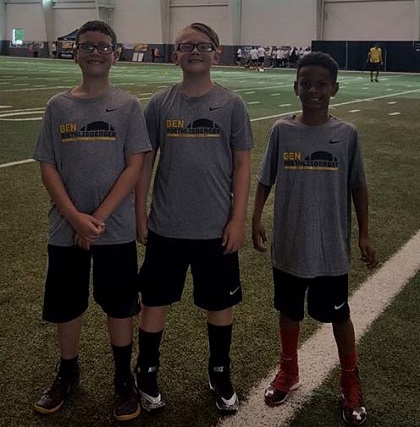 “We came to your camp today! Thank you Ben!!” — Kristy Jane.


“My son had ‘the best day ever!!!!!’ He was so nice to all the children and made a point to interact with as many as he could. The first of many we will be attending for sure!!!!” — Andrea Montroy. 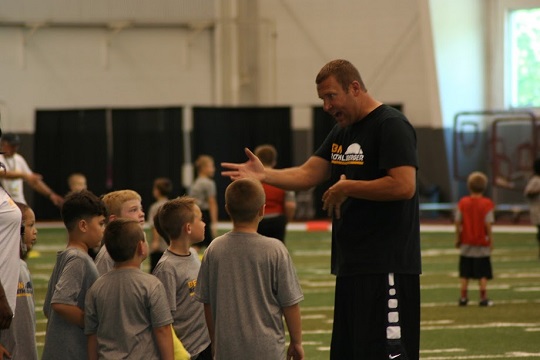 “Thank you so much Ben for all you do for your team which to me is the best and all the kids you help all the time.” — Susan Cange.


“Wow, my two younger grandchildren were there today. What an experience for them!! Thanks for allowing your time to be spent with a lot of kids today.” — Jackie Domer. 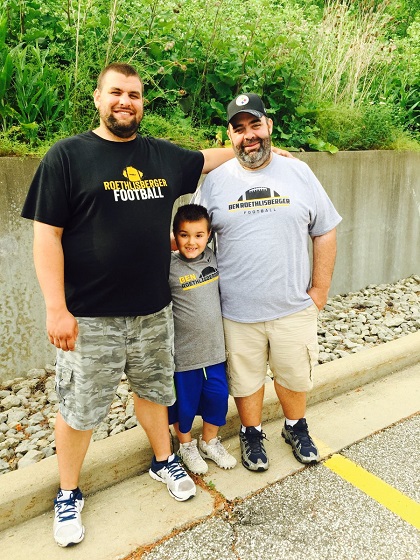 Brooke Bestor‏ @BrookeBestor
3 generations of Steeler Nation after a great day at Pro camp! Thanks @_BigBen7


Deron Tatala‏ @Tally316
@_BigBen7 @sunnydelight @ProCamps Loving the experience! So thankful to share this with my son! #Veterans #FathersDay 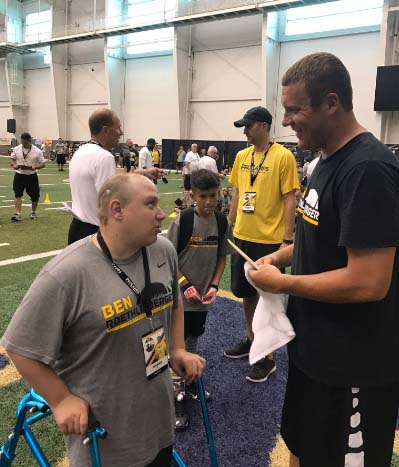 
“This is just wonderful what you’re doing for these kids and the community. Thank you so much!” — Sandy Smith. 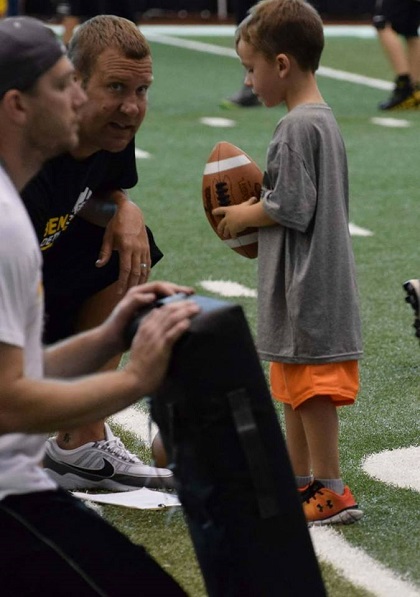 “Asher has been on the sidelines..one year, he played with Ben Jr. At age 6, it was his turn. Thank you for the time you took to show him how to pass. He is still doing it today. He is tiny but mighty. Thanks Ben!” — Cathy Chambers Pennybacker.


“We had a great day! My son Randall loved it and can’t wait for next year!” — Melissa Cloak. 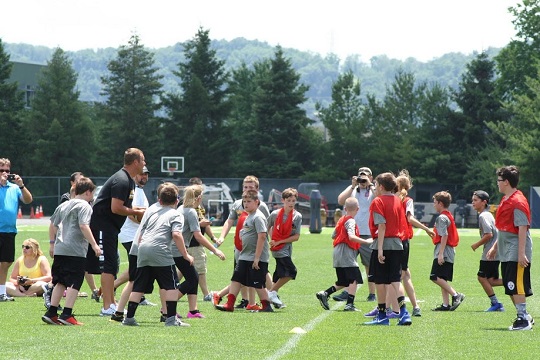 “I brought my two sons from Albany New York so my oldest son could see his favorite football player! Ever since he could talk he pretended to be Big Ben. He caught three passes from him. He was so excited! Thank you Ben Roethlisberger for giving them some of your time on Father’s Day!” — William La Rose, IV.


“Our son went as well from Albany, NY and it was the best day for him and my husband who has been a Steelers fan since the 70’s. (Second year straight going for them two.) In fact, even our daughter is such a fan she went to watch her brother and get an opportunity to see Big Ben. Can’t tell you how much it means to these kids. Thank you Ben for giving up your Father’s Day for such an incredible opportunity.” — Michele Skumurski. 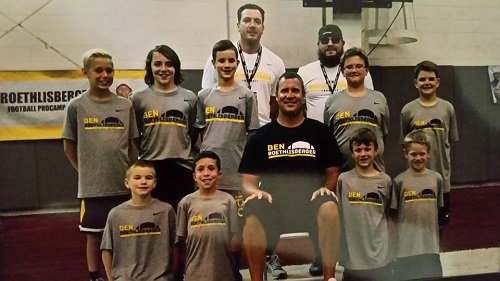 “Thank you so much Mr. Roethlisberger for making my kid’s year! Scotty had so much fun at your camp. We appreciate all you gave up with your own family on Father’s Day to be there at the camp and with our kid. Also, we are from Georgia and my husband and son had such a great guys trip this Father’s Day weekend so they could attend the camp. It was an experience neither of them will forget! Special thanks also to Mr. Pouncey for being there too and taking a pic.” — Jacqualine Hyde‎.


“We drove up from GA Sunday for the camp. I can’t express how thankful I am for my son to have the experience. But I have to get something off my chest . When Ben was leaving I tried to get a pic, he rushed out. At first I was mad, but I was wrong to have felt that way, I even talked to my son about this. Ben was there taking time away from HIS kids during Father’s Day. I remember seeing him running back and forth from camp to his family. He went out of his way to make the experience for kids memorable, and I feel like he did. Sometimes as fans we can be as selfish as I was, I hope the rest of Ben’s day was great! Thanks for all you do, on and off the field. My son​ already talking about coming back next year. I did talk with Pouncey during camp and got a pic, so big thanks to Pouncey for being there!” — Tommy Hyde. 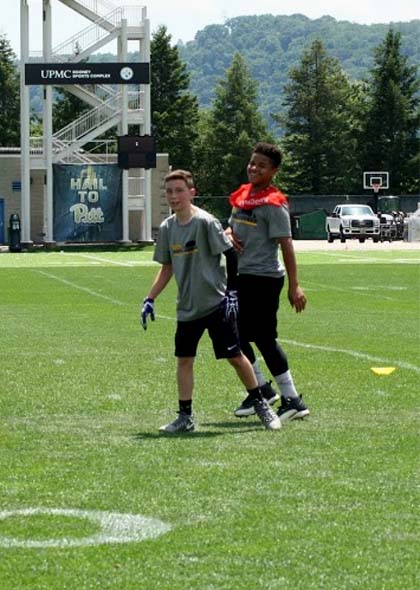 “We had a great time there this year, Next year we’re going to double or triple the food going to food bank. Also a big great job to Ben and all the coaches for a job well done, we’ll be seeing you next year…” — Sean Porter.


“Thank you for you and your wife for the time spent with these kids, especially on Father’s Day. Unforgettable experience for my son Devin Nether.” — Ca Ben-Nether. 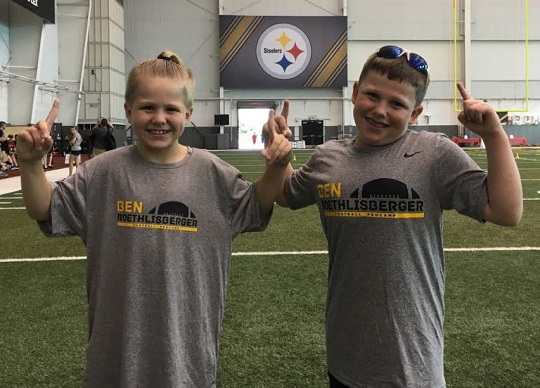 “I have always been a huge big Ben fan….and I have been a Steelers fan longer than Mr. Roethlisberger has been alive. But after attending this year’s Pro camp with my boy, I am his BIGGEST FAN!!! He is the real deal, folks! He loved interacting with those kids!! And Maurkice Pouncey was an awesome addition! Love him too! Happy Fathers Day to you guys! Thank you so much for giving my boy memories to last a lifetime (and his Old Grandma too) Hope to see you next year!” — Rhonda Lane.


Justin Couture‏ @sickdog5
Tyler got to meet @_BigBen7 thanks Ben we had a great time. Great job by @ProCamps 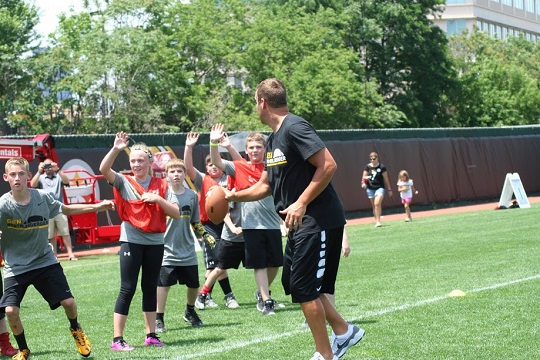 “My son was so happy to have met you! Thanks for all you do.” — Jessica Medrano.


“Camps can mean so very much to the children moving forward…sometimes the smallest things learnt in those camps mean the most in life!” – Joyce Ruben-Davies. 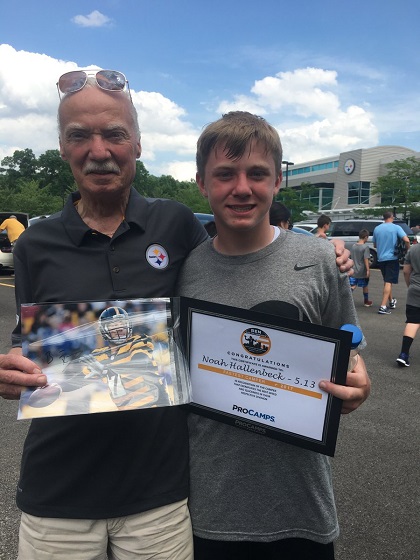 Andrew and Lorri‏ @beileberbecks
@_BigBen7 fastest camper in the Steeler Division. Had a blast!


“Thanks Ben for being so kind to these kids.” — Charlie Sizemore. 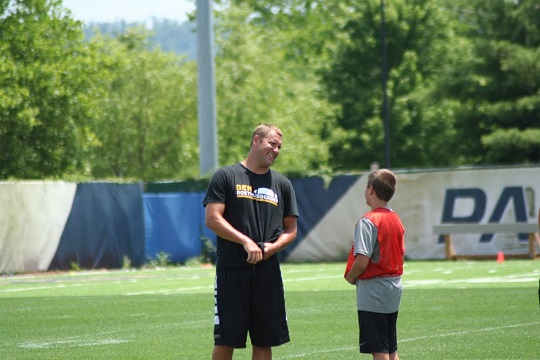 
“We had so much fun there yesterday at his camp and brought 21 can good items in my sons backpack. Ben is such a nice down to earth guy! His daughter was literally running around inside playing too and there had to of been like 6 long folding tables full of non perishables to be donated from the campers. It was just an overall great experience!!! We will be coming back every year for sure!!” — Andrea Montroy. 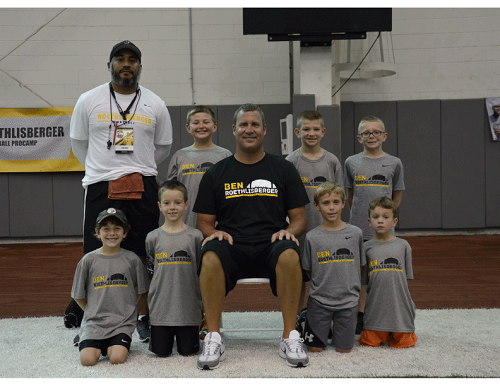 Peter Davila 🐧‏ @CoachDavila
@vulcansfootball giving back to the community and working the @_BigBen7 youth camp yesterday for @ProCamps. Had an AWESOME TIME!
Jun 21, 2017 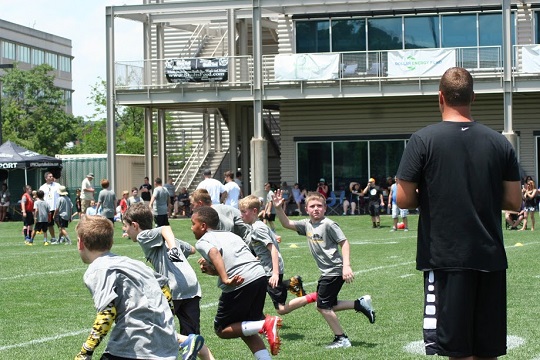 “Thanks for making this the best Father’s Dad. For a Steeler fan today is like Christmas morning. Ted Skumurski have an awesome Father’s Day. Happy Dad’s Day to all.” — Michele Skumurski.


“I am sure the boys felt so honored to have Ben throwing a pass to them!!! Ben is such a good family man, and Happy Fathers Day Ben!!!” — Judith Moore. 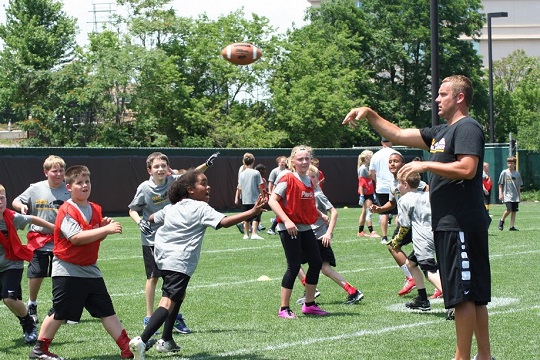 “You’re a great person Ben! God will surely award you someday for what you do for people.” — Donna Hay.


“Thank you so much Ben for all you do for your team, which to me is the best. And all the kids you help all the time. — Susan Cange. 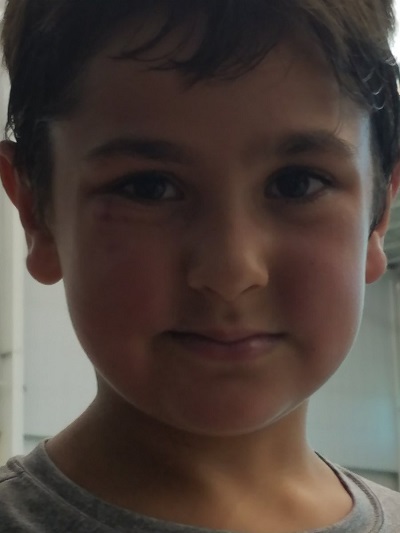 
“Me and my family had a great time at your camp. We are die hard Steelers fans. My boys’ dog is a big husky mix named ‘Big Ben’. My granddaughter played with your son. They were born on the same day, same year. Thanks for the camp for my grandson. have a great season.” — Paul Bestor.


“If I had not loved my quarterback already, I would definitely love Big Ben after watching him interact with those children. He is a wonderful guy and my boy will have this awesome memory forever. I hope to bring him every year he is eligible! And as excited as he was, he was a close second to me. This was one of the best days (weekends) of my life! 💛 I LOVE PITTSBURGH!” — Rhonda Lane. 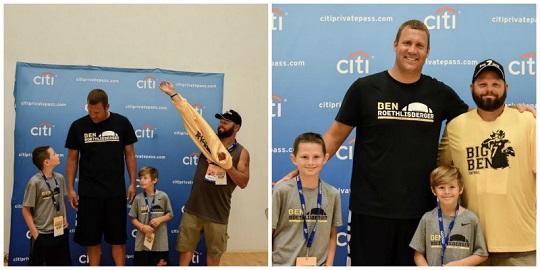 “I took my boys to Ben’s camp again this year they had a blast once again. I would like to thank Ben for giving up part of his Father’s Day to spend it giving back to his fans at his camp. I also would like to say thanks for my shirt he gave me to put on for pictures to cover up my Cleveland Browns shirt, lol.” — Thanks, Jaren Clonch, Cleveland Browns fan. 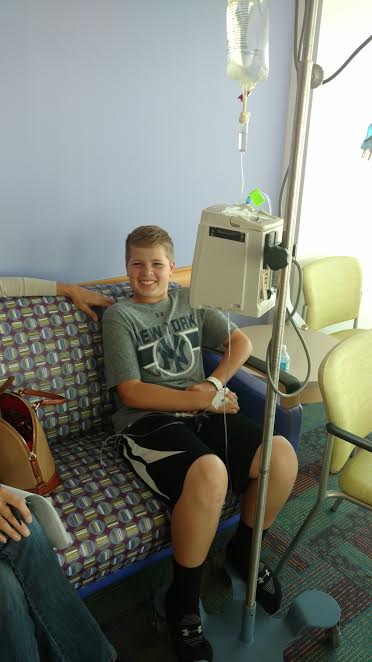 “My sons and I just attended Ben’s camp on Sunday on the South Side. I was a returning coach, and my older son Grant (15) was my volunteer coach for the day, while Alex (13) participated in the camp for the 4th time in the last 5 years. Alex was flown to Children’s Hospital on Monday and was very sick with Type 1 Diabetes that was discovered late yesterday afternoon after running tests. His blood sugar was elevated to 567. Alex wasn’t feeling well all weekend but didn’t want to miss Ben’s camp Sunday so we made the 3 hour trip to camp, which was a blessing because of his activity at camp the danger signs of this disease reared enough that we knew there was something more wrong with Alex than just ‘not feeling well’ or having a bug. This is a life changing event in his life and being at this hospital makes us realize how blessed we are just to be dealing with diabetes. Alex is now stable and the plan is for Alex to be discharged Thursday afternoon. The education process of this disease has started for all of us. His team photo with Ben is in his room. The football camp was wonderful and well planned, and we appreciate Ben’s commitment to his camp when lots of pro athletes make a cameo appearance and leave.” — Dick Ognen.


Steeler Nation, please keep Alex and his family in your prayers! And Alex, we want to see you back on teh football field enjoying yourself as soon as possible!


Update: “We are home. We left the hospital yesterday afternoon. By 6pm, Alex was participating in his teams baseball game. Went 1-2 in the game, took him out in 3rd for couple innings to check blood sugar. All went well. What a turnaround from Sunday evening, God is good. Very tough, determined young man. We have a long road ahead, and there will be set-backs, but we will take them in stride. Thank you to everyone for the well-wishes & prayers!!” — Dick Ognen.


*Thank you to everyone who sent photos and messages! Also a BIG thank you to Cheryl Pollock for the great photos and Billie Jo & Greg Yakubik for everything!!