Garber: This is how history is made

Home/News/Garber: This is how history is made
Previous Next

Garber: This is how history is made

“As a kid growing up in the street, I was Joe Montana throwing game-winning Super Bowl touchdowns…If you go down and win the game, there’s a chance there’s going to be a bunch of kids doing the same thing that I was doing — and they’re acting like me.” — Ben

From ESPN‘s Greg Garber this weekend: 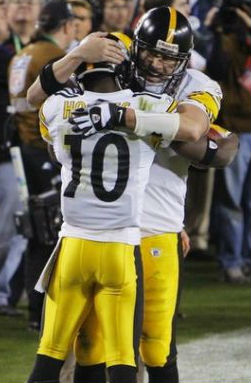 Sometimes, when hundreds of minor factors align into a perfectly coordinated storm, that fleeting moment becomes history, stored forever in our collective mind.

Ben Roethlisberger is not a rah-rah kind of guy. So when the Arizona Cardinals scored 16 unanswered points in the fourth quarter of Super Bowl XLIII to take a 23-20 lead, the Steelers’ quarterback low-keyed it.

“Hey, guys, listen,” he told his offense on the sideline. “Let’s just go take care of our business and do what we have to do. You know, be the best that we can be this drive.”

And then, sitting in a room overlooking the Steelers’ snow-covered practice field, Roethlisberger interrupted himself with an explosive laugh.

“The first play was a holding penalty, so it didn’t work so well,” he continued. “But we did better after that.”

Pittsburgh had the ball on its 22-yard line with 2 minutes, 37 seconds left. Inside, Roethlisberger was amped, but in the huddle, addressing his teammates, “I tried to be the same as I was all game. Don’t show any panic. Just go play the game.

“If you try and press, or stress yourself, that’s when bad things happen.”

After the Cardinals had taken the lead, Steelers wide receiver Santonio Holmes had told Roethlisberger he wanted to be the guy who made the plays to win the game. And, so he did. Holmes caught three passes for 67 yards and the Steelers found themselves on Arizona’s 6-yard line with 42 seconds to play.

Down the stretch, a funny thing happened to Roethlisberger. He actually forgot the score.

“As we started getting closer, into field goal range — this is absolutely horrible to say — but I forgot that a field goal tied it,” Roethlisberger said. “Like, I was focused only on a touchdown.

“I wasn’t even thinking about tying the game, which I probably should have, because the last pass was really close to being intercepted.” 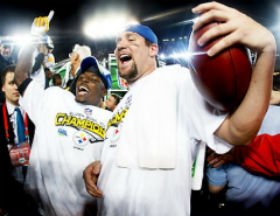 Ah, that last pass. The play call was 62 Scat Flasher, which called for receiver Nate Washington to go down the middle and featured receiver Hines Ward and tight end Heath Miller in high/low backside routes. Holmes? He was the fourth or fifth option, running a curl toward the right corner of the end zone that split the coverage wide-open.

Roethlisberger shuffled to his right away from the pass rush, buying himself a second or two, then heaved the ball toward Holmes — and three Arizona defenders.

“As soon as the ball came out of my hand, I thought it was going to be intercepted,” Roethlisberger said. “It was like slow motion. I knew it was intercepted. I was so mad.”

Holmes planted his feet just inside the sideline and extended his arms. As Cardinals safety Aaron Francisco made contact, Holmes caught the ball and held on as he fell through the end zone. With 35 seconds left, the Steelers led 27-23 and held on for their sixth Super Bowl victory, most in NFL history — one more than the San Francisco 49ers, the team Roethlisberger rooted for growing up.

The play has been compared to “The Catch,” the Joe Montana pass to a leaping Dwight Clark to win the 1981 NFC Championship Game over the Dallas Cowboys.

“He throws that high ball at the back of the end zone,” Roethlisberger remembered. “Clark goes up and catches it. I’m not taking anything from them, but what Santonio did was just as great. To get two feet in, to go up and pluck it like that …

“People still talk about it to me, just how great that drive and that play was.”