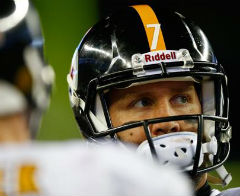 Ben Roethlisberger turns 32 in March, but he’s not slowing down. If anything, the Steelers’ two-time Super Bowl-winning quarterback is getting better with age.

“Looking back on it, even though we didn’t make the playoffs, Ben really had a good season,” tight end Heath Miller said.

Roethlisberger, who vehemently denied an NFL Network report in early November that he would request a trade, completed 102 of 163 passes for 1,221 yards and 10 touchdowns operating out of the no-huddle offense. He also called the plays from that formation.

“It wasn’t just me,” Roethlisberger said. “A lot of guys contributed to our success in the second half.”

Roethlisberger not only put up good numbers, he became the unquestioned leader of the offense.

“He did a great job of it this year … and not only in terms of his input, but his leadership,” coach Mike Tomlin said.

“In the little time I was here last year, he wasn’t a real vocal guy,” Moye said. “But when we were going through some tough times at the beginning of this season, he kind of stepped up and kept us all together.

“All through the stretch where we were playing pretty well, he kind of was the glue that helped everybody stick together.”


You can read more from Mr. Musselman’s column here.