To Ben and the Steelers, from active military around the world, veterans, and their families here in the US: 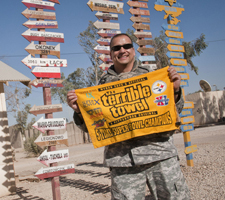 “Good morning from Iraq! I’m a US Army soldier, getting ready to finish out my tour in Iraq and was just wondering if you would like to pass on to Ben (and the rest of the team) some of the attached photos of me and my teammates during our travels through the country with my Terrible Towel.

“I’ve been a Steeler fan since I was a kid and never thought I’d get to do the things I’ve been doing for the Army and for our country…I just wanted to share these with you all and hope you enjoy them…One thing I’ve been able to do is follow the Steelers during this deployment and I’m looking forward to getting home and catching the last couple of the season from my home (in Virginia) with my family. Take care and thanks!” — CW3 Thomas Romero, US Army – serving in Iraq

“Ben: You do a good thing to recognize veterans. A prompt from home, especially the home team, boosts morale and gives our guys a huge lift. I was there, I know.” — God bless you, Dan Baker (Wheeling) 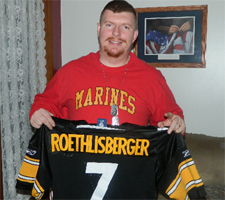 “Ben, throughout history men have won and lost great battles. For the ones that are lost doesn’t mean that the war is over so continue doing the amazing job that you do and in the end you will become victorious…I also want to take this opportunity to say I am very grateful for all the support you and the Steelers show our military, going to war is one of hardest things a soldier must face but knowing we have support, helps us to remember why we serve in the first place. God Bless and Go Steelers!” — Veteran Corporal Gregory Yakubik, 1st BN 5th Marines, Charlie Company, United States Marine Corps

“As a retired U.S. Marine Master Sgt., thank you Big Ben for the many days of happiness and relief of stress that your style of play has brought me. You’re one tough dude, keep playing hard and…Go STEELERS!!!” –MSgt. George L. Hall, Retired USMC 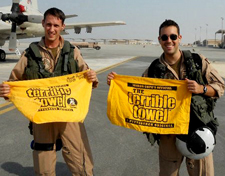 “I’m LTJG William L. Tschumy, USN and I just wanted to share a photo of a buddy of mine from Flight School who just so happens to be one of your team’s greatest fans! His name is Lieutenant Junior Grade Bobby Telatovich, callsign, “Fun Bobby”, United States Navy. He is currently forward deployed. Honestly, I’m sending in this picture because I’m not sure how those Terrible Towels made their way to the other side of the world, but they did, and I thought it would be cool to show the rest of America and the world this picture of a Die Hard Steeler Fan! He’s the dude on the right with the sunglasses, one of my best buds.” — LTJG William L. Tschumy, United States Navy

“To my family, friends, & all others who have been & are presently in our armed forces, I want to thank you for putting your lives on the line for our freedoms. Also for helping others try to obtain that same freedom in foreign land. On this Veteran’s Day & every day we prayer for your safety & safe return home. To that I salute you.” — Marilyn, Silver Spring, MD 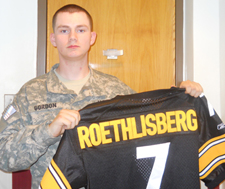 “Message to the team – Great job week in and week out, young guys are stepping in and working through adversity only makes the team more cohesive. The Steelers (you guys) are the reason why I wake up at 0200hrs on a Monday morning to watch football. It’s not just football, it motivates me to work hard and do what has to be done, just so I can see next weeks game. Its the reason why my peers knock on my door because they hear yelling and screaming coming out of the room down the hall. Football has always been a pastime, and the best way to enjoy it is to sit back and watch the only NFL team that brings back the good memories, warrior, and optimist out of me. The team boosts moral like no other, and makes me Proud to be an American Soldier Serving the great country, The United States of America.

Added a picture of approx 12 miles north of where I am, known as the JSA. Heading back stateside in December, I’m looking into attending my first ever Steelers game, keep up the great work and thank you for taking time to read this. Now lets go get another ring for the other hand (7). STEELER NATION IS AROUND THE GLOBE!!” — PFC Gordon of A-Troop, 4-7 Cav., U.S. Army, Camp Hovey South Korea

“Greetings from California! I am a disabled veteran, a retired Sgt. from the US Air Force. Black N Gold has always coursed through my vein, even though I’m a California native and, other than my military tours, have always lived here. I have worn my Steelers attire in Saudi Arabia during Desert Storm, in France, Germany, England – wherever I may be! My best to our Steelers for the rest of the season. We can do this. We’ve done it before.” — Take care, Jeff Kasik 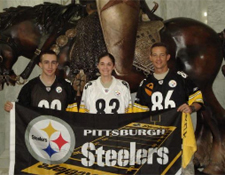 “SGT’s David and Tricia Aponte and myself, CW4 Dave Bassili. Been in 22 years and still going strong.

Just tell Ben and the boys win or lose, I still bleed black and gold!

And why did it take so long to start going to Heath more than for just an outlet? Just kidding! Just win, that’s it! Go Steelers!!”— CW4 Dave Bassili


“Dear Ben and the Steelers,

My name is Jennifer Thompson. I am sending this email on behalf of my husband Sgt. Garry Thompson. My husband is now medically retired from the Army after 17 years of service but he will always carry the military with him. It is who he is. He has always been in law enforcement in one aspect or another since the age of 18-years old. He has been in the military police corp as well as a cop in Cocoa Florida. It’s a part of him. 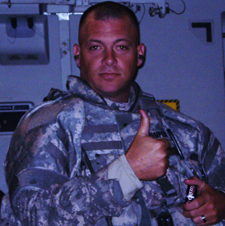 “On May 28th of 2008 I received a phone call no Army wife ever wants to get. A spokesman from the Department of Defense called to inform me my husband had been critically injured and partially paralyzed from the waist down after being shot twice in the back – one shattered his spine and the other is still lodged in his side. I am not writing this to depress you, rather it is quite the opposite. My husband Garry still loves the military and his comrades more than ever. He always states to me he would do everything again even if he knew what the outcome would be. He is wheelchair bound but it doesn’t get him down. It’s just a challenge to continue doing the things he loves just in a different way. He spent time with the Steeler players for the Heroes at Heinz Field event and it made his year.

“To know you care enough to go out and spend time with these heroes is amazing and I am so very thankful. I have never seen another team do what you do. We spend our quality time together during the games cheering you on, sometimes a bit too loudly but our neighbors understand. I just wanted to send an email letting you know how blessed I am to have this hero in my life and to thank you for all you do!!! Goooo Steelers!!!”— Sincerely, Jennifer Thompson


*Thank you to everyone who sent messages. God bless, stay safe!