From Steelers.com: Ben weighs in on this week’s game against the Tampa Bay Bucs.


Re: The return of James Harrison: 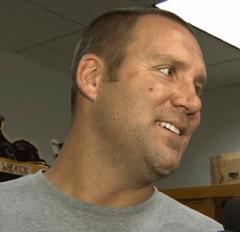 I am excited. He’s a guy that I’ve been around for a long time. A fun guy to be around and a great football player. I think he’ll really help us out from a leadership perspective on the field, off the field. (He has) an intensity on the field as we all know about. I know how hard he works so I firmly believe he’s still got stuff in the tank.

Yeah, part of the love of James is that the guys that have been around long enough know who he really is and know that he’s a fun, funny, good-hearted person. But yet, when he flips on that switch he becomes one of the nastiest people in the NFL and he’s fun to have on your side.


Does that mentality create a presence that rubs off on others?

Yeah that’s what I was saying that it’s good to have him out here. I said on my show that we have that in Joey (Porter) but Joey is a coach. Now we have it in James who is on the field (and) can bring a level of toughness to a young defense. I’m excited to see what he can do.

What it comes down to is it comes down to trust. We have all kind of trust in A.B. and Heath like you said and that comes from working with them for years. That’s starting to really show with Markus and Justin and hoping to really get some of that with Lance (Moore). It comes down to when you can trust a guy and they can trust you, they’re going to be in the spot that they’re supposed to be in and it makes your job a lot easier.


Was the performance of the offensive line due to execution or being more physical?

Probably both. I thought that they played great. I think they rose to the challenge (and) to a tough task. They took a lot of pride and a lot of hurt to the Baltimore game and so I think they kind of put all that into a little ball of rage and took it out on Carolina if you will.


How do you guard against letting down for an opponent that struggled the previous week and how do you make sure your teammates are where they need to be?

Well offensively speaking, they’re a good defense. The games they’ve played, other than last week, have been close and they’re really good on defense. Coach (Tomlin) when he went over the scouting report today he spent probably three-quarters of the time on their defense. They’re getting a couple guys back healthy on their d-line that will really help them. It doesn’t get any easier for us on offense this week. It’s going to be a tough task and we’re going to have to really come out and be on our p’s and q’s.


With all of the injuries on the defense will there be more urgency for the offense to get things started?
Well yes and no. We always want to have that urgency. We always want to put 30 points on the board and dominate on offense. Is there going to be a little more of it this week and probably the next couple of weeks because of injuries? Probably, but we have to be careful not to get caught up in trying to do too much to protect our defense because our defense will be fine. We have guys that can make plays. So we just have to keep doing what we want to do and continue doing what our goals are.


You can read the rest of Ben’s interview and watch it (video) here.