Home/News/It was 10 years ago…
Previous Next 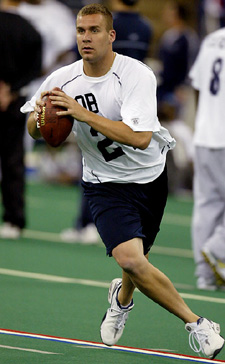 “People can look at Ben and say, ‘OK, wait a minute. He was a junior, and he was ready. But two things: He was a redshirt junior, so he had been in school for four years, and second, he wasn’t ready to do what he did. And that sounds wrong, because he had a great rookie year. But we never felt he was going to be ready that soon. Tommy Maddox was still coming off a pretty good year for us, and then he gets hurt in Week 2. But we drafted Ben with the thought that he would eventually replace Tommy. We didn’t anticipate him playing that early, and we certainly never thought he’d play that well that early.” — Steelers GM Kevin Colbert, from an interview with Don Banks, for his column on the NFL Combine, Sports Illustrated.

And you don’t want to miss Len Pasquarelli’s thoughts on the three top QB’s in his column for ESPN about the 2004 NFL Combine:

Of the three likely first-rounders — Roethlisberger, Eli Manning of Mississippi and North Carolina State’s Philip Rivers (one of the fastest-rising players at any position) — all are pretty much classic pocket passers.

If the current pool of draft-viable quarterbacks is any indication, the scouts and coaches will have to keep looking…


You can read it here!