Home/News/It’s a Tattoo Tuesday!!!
Previous Next

Okay, so this is our first one, but it IS Tuesday and you have to check this out! 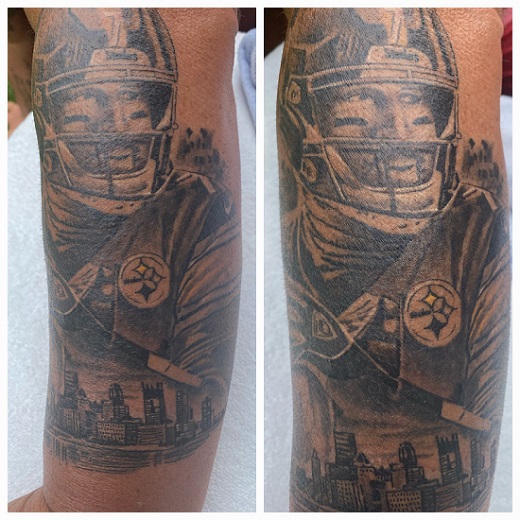 “Alert alert”, “Blue 80”, calls from the “Franchise” #7 won’t be heard this fall. Sundays won’t be the same without #7 calling the plays. In honor of Ben and his career, I just got the attached Tattoo on my arm, done by Edwin Oquendo, Owner of Tattoo Maven.

Obviously I am a huge Ben Roethlisberger fan! Why else would I get another man tattooed on my forearm? Lol

BTW – I have another tattoo with Ben’s quote from last year, that he would never play for another team but the Steelers.

Throughout the past 17 years, I have purchased just about everything imaginable of Big Ben’s. From his College Jersey, to Steelers Jersey (Reebok to Nike), home, away, bumble bee, alternate, to his BBQ Sauce, to his Nike sneakers after his rookie year, to hats, T-shirts, you name it, I have it. Living in New York, my wife & I still attended two games per year.

Frank, thank you for sharing your new ink with us!!!