Home/News/It’s Jets vs Steelers…
Previous Next

And the talk has already begun….but it’s all good! 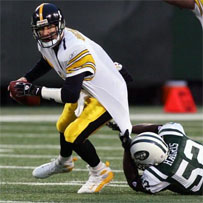 “He’s a quarterback, who I think, is by far one of the best players in this league. That’s a lot of ‘tough sledding’ to overcome. He’s tough, he’s loose, he’s a great football player…but I think he embodies the temperament of a winner. Rex has the utmost respect for him. He’s told us that many times, and the other way around, the same thing.

“Tom Brady is not going to move. Tom Brady is looking to be hit. Ben wants to be hit. He has a much different mentality. He brings a tough-guy mentality to the game.”  — Jets defensive end Trevor Pryce, from Jets.com today (click on the link to see the video).

“I don’t think anything really works with that guy, because he makes it up as he goes along. He’s as big as all of us and he’s impossible to tackle. He will not go down. If you go in there and do the same thing, he’ll kill you.” — Trevor Pryce, talking about Ben again on ESPN later this afternoon.


“I’ve never seen a guy take the hits he can take and also make people miss the way he does and be as accurate on the run. ” — Jets Coach Rex Ryan, from a Q&A with the media.


“I give Ben Roethlisberger a lot of credit, he’s man enough to stay in the pocket, look in the barrel of the gun and take the hit. Most quarterbacks don’t like getting hit. When they get hit, they turn into a totally different person.” — Jets linebacker Bart Scott, also during post-game comments.

Do YOU have something good to say?

If you would like to send your support messages to Ben and the team, just email Erin. I will post them later this week. Just make sure to give me your first name and your town/city or at least your state!

Check out Brett-Keisel.com for the “Fear the Beard” photo contest! The winner will receive an autographed photo of #99, who has THE #1 playoff beard!  Uh, the ladies are welcome to submit photos too!