Home/News/“Just another guy”
Previous Next

Steve asked that we share his thoughts on yet another “unforgettable moment” in his son’s life, shared with his favorite football player: 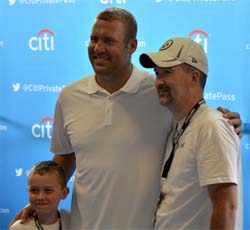 It’s amazing to me how these memories of Ben just keep being made for Bryce to be put in his memory box.

This all started with the game that Bryce and I went to (a home against the Ravens) and our desire to have a simple game photo signed in Chantilly, VA a little over a year ago. But Ben did more than that…he interacted with Bryce on a kids’ level at that show, while making him a bigger fan in the process.

Next up….winning that game used cleat for his birthday. That was the talk for months! With all of this, I became a bigger fan myself, eagerly anticipating another opportunity to see Ben in person and have inscriptions added to his cleat and hopefully, a photo along with it. So we were thrilled when his King of Prussia event was announced. So that wish came true…..and thinking there was nowhere to go from there, we won the lottery: LUNCH WITH BIG BEN ROETHLISBERGER.

I kept this part a surprise from Bryce until the end of camp. I waited for the announcement to be made from ProCamps to tell him. When Bryce heard his name called, he turned around with the most puzzled, yet excited look on his face, as if hoping not to be let down by what he thought he just heard. When I told him he heard right, he got quiet, and in a very emotional way said the most heartfelt “Thanks Dad”. I know it meant so much to him to be hanging out with Ben at lunch, like he was just another guy……he is, but he isn’t.

Ben interacted the entire time with the kids. He answered a question from each one after lunch. Bryce asked if he was happy not to be facing Ray Lewis anymore, lol, which made Ben laugh. Then it was time for our picture to be taken. Ben signed Bryce’s “Ben” helmet with all that I asked him to include – just more of a keepsake for him. 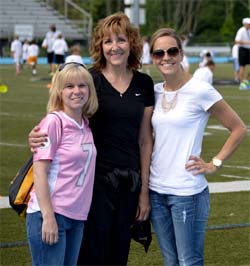 I feel so fortunate that Bryce has been on the receiving end of so many great experiences with Ben. I hope someday that Ben will able to realize just how much of an impact he has on these kids.

As I have said many times, he doesn’t have to do the things he does – like acknowledging the two kids who have been without their father while he is serving our country. Taking the obvious bias out of it, that was the best part of camp.

Not only did those boys make great catches, but you could tell when it happened that it’s something they will never forget. That’s a powerful quality to have, making an impact on people like that.

Thank you doesn’t seem like enough, but thank you Ben. Thank you for some very special memories between my son and I that neither one of us will not only not forget, but will be at the forefront as some of our favorites.

Thank you also to Ashley, little Ben Jr., and Ken and Brenda Roethlisberger for your time, sacrifice and graciousness. — Steve Bishop, New York

*Thank you so much to Steve, Michelle & Bryce for sharing your story!!


You can see more of Steve’s photos, along with a few new ones from other parents here!