Let’s “paws” for just a moment

Home/News/Let’s “paws” for just a moment
Previous Next

Let’s “paws” for just a moment 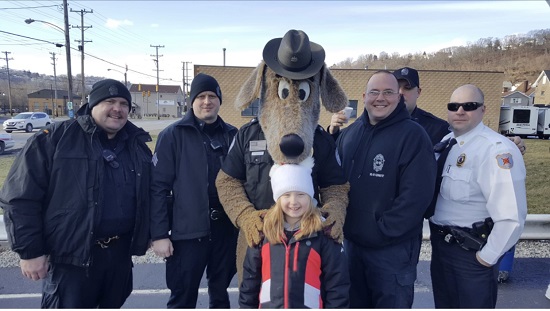 Peyton’s K-9s is a local Pittsburgh mission to raise money for local K-9 units in need. Whether it be medical expenses, vests, heat sensors needed or anything else the handlers may need…Peyton tries to ensure everyone gets what they need with what she can raise! Peyton is 7 years old. She was just 6 when she started this mission. First, she held a Sweet Tea Stand in McKeesport, PA because one of the K9’s (Farkle) had cancer and their medical bills were very high. She hosted this event selling HOMEMADE sweet tea for 2 hours and she raised $700! She donated it directly to the McKeesport K-9 unit. She was recognized after this event with a proclamation from the Mayor of a mcKeesport. It was called “Living the Message Award – honoring those who show Respect, Dignity, Hope & Love” – specifically the “Love” award. She also received a letter from Pennsylvania State Senator Jim Brewster recognizing her hard work and dedication.

She was back at it again with a hot chocolate stand at a local friend’s ice cream shop (Christy Park Cones) in McKeesport PA, because she did not want to wait until summer to host another event. At the end of January, she held a 2-hour event selling HOMEMADE hot chocolate, baked goods & t-shirts and raised $2,400 dollars! We knew then it was time to start really focusing on this mission of hers and making more units in need outside of our hometown of McKeesport a priority.
Since then, we created a website to put events up on as well as continue to sell t-shirts. We partnered with a company based in Georgia called, Nine Line Apparel since they are veteran owned and they created a design just for her mission!

What is Peyton up to next?

She has been invited to a Police Conference sponsored by Blue Line K9 LLC April 23th through 25th. She will be there with her own table selling t-shirts! She is super excited because they are expecting 300-400 police & emergency responders there.

And closer to home –

Peyton will be hosting a car wash at Advanced Auto in Irwin, PA on May 5th from 12-4pm. We will sell T-shirts as well as snacks and refreshments…and you can get your car washed at the same time! We hope to raise more than what we raised at our hot chocolate stand!

Steeler Nation! If you’re in the area (8716 Norwin Avenue) on May 5th and are ready to wash off all that pollen for a great cause, stop by her car wash and help her raise money for PEYTON’S K9’S!