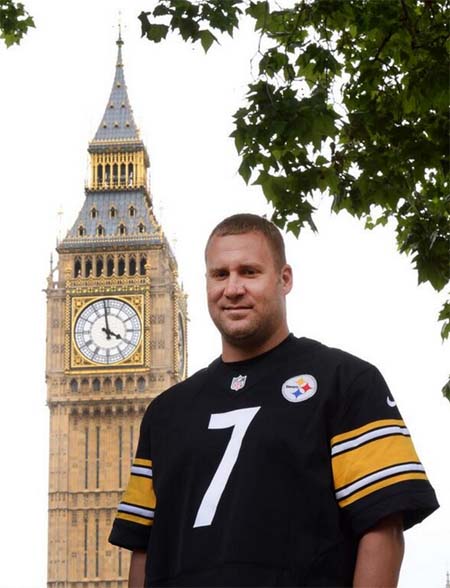 “This is a new, unique thing for us.It’s something that is different and fun and guys are really looking forward to the game. We enjoy having the fans there. It’s going to be great. We hope to see a lot of Steelers fans at the game.” — Ben

Big Ben landed in London last night to promote the NFL game this September 29th between the Steelers and the Minnesota Vikings at Wembley Stadium!

After a bit of sight-seeing, Ben will head to Ireland to visit with Steelers’ chairman Dan Rooney, the former United States Ambassador to Ireland. Ben will also be on hand for the Annual Fourth of July Flag Football game that Mr. Rooney hosts and will be the official coin tosser for the game!

“I got to go to the Ambassador’s residence last year and see what he does there, but it will be great to go back,” Ben told Teresa Varley at Steelers.com. “Plus we get to see the game he puts on for July 4 and I will make sure I do a good job flipping the coin.”


Mr. James Caroll shares this video of one of Ben’s interviews:

Check back for more on Big Ben’s UK Tour!


*Thank you to NFL-UK for the photo above, and to Mr. Burt Lauten, Steelers and the fans for other photos that you can see here!