And with just a couple more days to spare…

We’re starting off with a story from last summer’s training camp because we couldn’t pass up this big smile – or the reason it was put there: 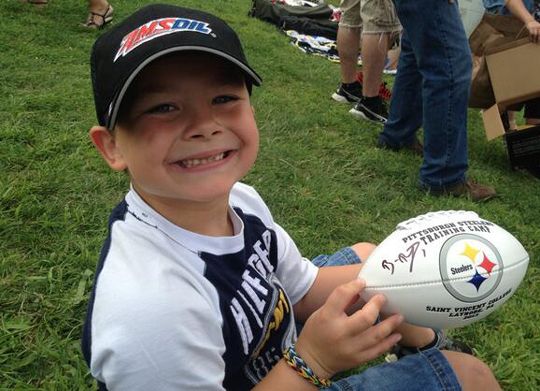 2013 was our third year going to training camp. We always try to make it to the night practice at Latrobe Stadium and have never even got close to getting Ben’s autograph. But last summer, with the last open practice moved to St. Vincent, it gave us a better opportunity. We had just arrived at the field, and were sitting along the fence line when I saw Ben headed our way. I encouraged Christian to squeeze his way along the fence and hold his ground and just hold up the football as high as he could. There was a lot of pushing by the bigger kids, but Christian scored an autograph from his favorite player, #7. He clutched that ball all day, it now sits on our mantel above the fireplace.

I keep promising Christian we will make it to a football game at Heinz Field some day before he gets too much older, I’m not exactly getting any younger either. Hopefully, it’ll be one of those lifelong memories between grandfather and grandson that we will never forget. — Tom Melnik, proud grandpa.

Christian is joined this month by some other Lil’ Fans – of the very lil’ variety:

From left to right is RJ Brim, Veronica Roden and Ruby Oakes! Oh, and we also have a #7-wearing dog named “Ben RoethlisBeagle”! You can see him here!

We also have a couple of big fans who made Steeler Nation worldwide during their March travels:


You can see all the latest fan photos in Ben’s gallery here, including more fans representing #7, some great artwork, birthday wishes for Ben, and a lucky NFL fan’s day at the Bruce Arians Inaugural Arizona Celebrity Golf Classic!