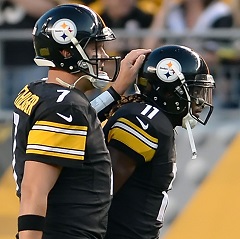 Pittsburgh Steelers coach Mike Tomlin has been patient with Markus Wheaton but that might be running a little thin after the second-year wide receiver caught just four passes last Sunday in Cleveland despite getting targeted 11 times.

He and Ben Roethlisberger seemed to be operating off different scripts, something that became painfully obvious to the Steelers on a critical third down early in the second quarter.

Roethlisberger said before the Steelers’ first practice of the week that Wheaton is still adjusting to the speed of the NFL game after playing just 152 snaps as a rookie and missing four games because of a broken finger.

“In college you can kind of wait for a receiver to come out of a break before you throw it,” Roethlisberger said. “Here you have to throw it before they come out of their break. He’s working hard to make sure he gets the proper depth, to get his hands around with his head and make the play. I know he will.”

Wheaton followed through on a promise he made after the Steelers’ 31-10 loss to the Browns. The 5-foot-11, 182-pounder showed up at the Steelers’ practice facility early Wednesday morning so he could watch film of the game with his quarterback.

“I think that speaks volumes about him wanting to get in there, wanting to learn, to be corrected,” Roethlisberger said. “I broke down every single pass play that he did and told him what I thought he did right and what he did wrong. He’s the type of guy that’s going to take that and make him better. I have all the confidence in the world that Markus will come out and be better than ever.”

You can watch Ben’s regular Wednesday interview with the media here (video).