From Jeff Dickerson at ESPN.com: 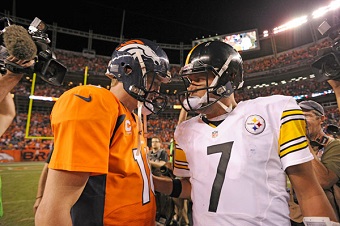 Chicago Bears rookie Mitchell Trubisky relishes the opportunity to speak with high-profile quarterbacks — past and present — about how to handle life in the NFL.

Trubisky, selected second overall by the Bears – said on Friday that Peyton Manning, Andrew Luck and Ben Roethlisberger are among the quarterbacks he has leaned on for advice since leaving North Carolina for the pros.
“I talked to Peyton throughout the pre-draft process about whether to come out for the draft or go back to school,” Trubisky said on ESPN 1000’s “Kap and Co. Show.”

“He gave me advice on that; as well as what the NFL is all about and what you have to do in order to succeed. I spoke with Luck about the same thing. I love talking to the guys around the league. I’m all about being a sponge and getting as much information as possible.”

Trubisky thinks arguably the best wisdom came from Roethlisberger, who like Manning, is a two-time Super Bowl champion.

“One of the best pieces of advice I got was from Ben Roethlisberger,” Trubisky said. “We have the same agent so I was able to throw with him when I was preparing for the draft. He said, ‘You just have to go in there and be yourself. You have to be confident in your abilities and what you bring to the table. And your career is going to go how you want it to go.

“It sounds cliché, but I think that really resonated with me because you have to take charge of your future, your plan, and what you want to bring to an organization. You have to go in there, be confident, shape things the way you want them to go and have a voice and then people will follow. That was huge for me.”