Did you miss it? Have no fear, we have the goods here!


“A loss is a loss to me. I don’t care how much you lose by. You lose by one point and it still a loss and it still hurts just as bad. So, we look at it as a loss, not it could have been this way or it could have been that way because there is an element of luck involved this game. The ball needs to bounce your way, but how could we have not made it be close? How could we have scored more points? How could we have not let them score as many points? Whatever it is, that’s what we need to evaluate and figure out how can we change it so it doesn’t happen again?” — Ben

Ben sat down with Mr. Pompeani last week in Latrobe. The interview was shown this afternoon on KDKA-Channel 2 during the 5:30 PM broadcast: 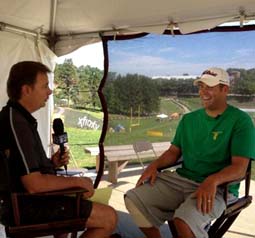 Pompeani started the interview by asking if having a child will make him a better quarterback.

“It brings a different perspective to life. It definitely teaches you discipline and patience, so maybe it will translate to being a better football player,” Roethlisberger said.

With the amount of head injuries piling up in the game of football over the past few years, some are questioning whether or not to let their kids get involved with the sport. Roethlisberger said he would let his son play football, but he has one restriction.

“If he wants to, absolutely, he can do whatever he chooses to do – within reason obviously. But my only stipulation that I will hold back will be that you can’t play until fifth grade. That’s when I played. I think kids are playing full contact way too early now. First, second, third and they’re hitting in helmets and that stuff. That’s the only thing I’ll say – no until the fifth grade. Flag football before, fine, but no full contact until at least the fifth grade,” Roethlisberger said.

Last year, much was made about a supposed rift between Offensive Coordinator Todd Haley and Roethlisberger. However, Big Ben said that there were no issues and their relationship has grown over the past year.

“I think it’s great. I don’t think there was ever an issue. People made such a big deal about our relationship and we just kind of laughed about it all last year because we felt like it was non-existent – the issues were non-existent. But, this year, I feel like we’ve known each other one more year. He knows the other coaches one more year, other players. So, the relationship has evolved and I think that will translate into us being better on offense,” Roethlisberger said.

A couple of reports quoted Roethlisberger as saying he was frustrated last season. Roethlisberger said his frustration came with not playing up to the level he expects from himself.

“Frustration can come from a lot of things. For me, it was from not playing well from being frustrated and whether it was interceptions or not playing up to my expectations. I think that any good player, any player that has a competitive bone in their bodies is going to be frustrated at times if they don’t feel like they’re playing as well as they should,” Roethlisberger said.

There are some new faces on offense with the departure of wide receiver Mike Wallace, but Roethlisberger is excited about the weapons he does have at his disposal this year.

“I think we’ve got so many weapons. We’ve got a lot of great receivers, tight ends, running backs and we’ve added some new guys. I’m excited about having those weapons and ‘toys’ out there, but that will be fun just getting them the ball. That’s what I have to always remember – they’re better playmakers than I am, so get them the ball as fast as I can and let them do the rest,” Roethlisberger said.

There were some criticisms of the Steelers’ offense employing a “dink and dunk” strategy last season and that the team didn’t look comfortable running it.

“I don’t think it’s negative at all and that’s why when last year, when it got blown up that ‘Ben says this offense is dink and dunk,‘ Todd and I laughed because that’s a good thing. You’re dinking and dunking all the way down the field. It means you’re controlling the ball, your possessing it for long periods of time, which gives your defense a rest. Around here, Steeler football has always been about controlling the ball whether that’s running the ball or whatever it is. So, dinking and dunking is just moving the ball methodically down the field, taking care of it, taking up time and hopefully scoring when you get in the red zone. So, it’s not a negative like people made it out to be,” Roethlisberger said.

Pompeani asked Big Ben to complete the following sentence and Roethlisberger had a little fun with the response:

Pompeani: The Steelers will win the division if…

Roethlisberger: We beat all the other teams.

Pompeani: How will you do that?

Roethlisberger: Score more points than they did.

After sharing a laugh, Roethlisberger offered some insight into what will make the team successful this season.

“We need to play Steeler football. We can count on our defense doing what they’ve done every year and that’s being a top-rated defense. Offensively, we joke about it, but we need to score points in the red zone out of the red zone and really limit the punting and kicking. That’s always my goal going in is I want to tell the punters, ‘Listen, sit back and watch the show and [Shaun Suisham], you can come in and kick extra points. That’s it.’ That’s always a goal as a quarterback going in because you want to convert every third down and score every time you get in the red zone,” Roethlisberger said.


“So, I’m going to live and play every game, every play like it could be my last because you don’t know – like I’ve done the last couple of years. Some people say, ‘Get down. Don’t take the hit.’ Well, I can’t. I live for this play. If it’s my last play, then I’m going to give it everything I have. So, I’m going to play this game until Mr. Rooney says I can’t or the Good Lord says I can’t. So, we’ll see when that is.” — Ben

Thank you once again to Mr. Pompeani!


“We’re saving out touchdowns for the regular season and all our offensive prowess ’til later (smiles). We’ll take this game, we’ll look at this game, the good, the bad, and the ugly, and make our improvements and our corrections.” — Ben