“Training camp was great. The preseason was great. I still didn’t know what to expect, but it was truly awesome to hear the fans. I love being back out in front of those guys again.” — Ben, talking about the fan response at Heinz Field yesterday. 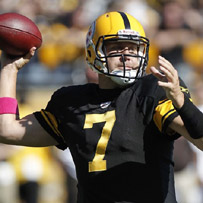 Stainless Steeler: Ben Roethlisberger actually did look a tad rusty early in his 2010 debut, yet the Browns simply didn’t have the personnel to hold him down for long, and he finished with 257 passing yards, three TDs and one interception.

Roethlisberger immediately vaults back into fantasy relevance as a Top 10 passer. Once he started rolling, Roethlisberger was clearly mechanically sound and in sync with his pass-catchers. Don’t discount the impact of the performance by pointing out Roethlisberger was only facing the Browns. Good players beat the teams they are supposed to beat, which is exactly what Roethlisberger did.

He’s not crazy about the “Big Ben” handle anymore. He got emotional pulling into the stadium parking lot Sunday morning, and even more emotional during the Star Spangled Banner when he looked up into the private box his father and stepmother were in, thinking of all the stuff he’d put them through in the past year or so. “That’s when I got a little teary,” Ben Roethlisberger told me last night. “I know it’s been rough for them, and they’ve been there for me.”

When he stepped into the huddle for the first time, Roethlisberger said nothing memorable but will remember the looks he saw around him. “Smily,” he said. “Excited. I could tell. Nobody had to say anything.”

Does that crow come with a side of fries?

Ben Roethlisberger made his big debut against the Browns on Sunday and made me look silly in the process. After watching one of the pregame shows and seeing the workout regimen Big Ben went through to be in game shape, well, let’s just say I might have been singing a different tune about my wait-and-see approach.

Oh, and what made him sit down for a lunch of crow and fries? You can read that here.

But Roethlisberger wasn’t sacked once by the Browns on Sunday. I have been critical of the offensive line in the past, but new offensive line coach Sean Kuglar has his unit playing very well this season. Drafting center Maurkice Pouncey in the first round provided stability in the middle and helped make the other four linemen better. Roethlisberger took some hits and had to throw the ball away several times. But overall he had enough time to throw downfield. 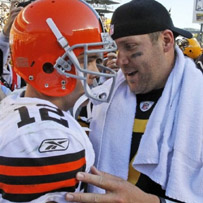 “I wonder which quarterback was more anxious about yesterdays game before it started, Roethlisberger or Cleveland’s Colt McCoy?” — Guy Junker, Pittsburgh Tribune-Review.


“I was proud of him. It was not an easy task that he had today, on the road against our defense. I told him I was proud, I thought he played well and to keep his head up and we’ll see him down the road.” — Ben, on the play of Browns rookie quarterback Colt McCoy.


“He came in, took control of the huddle as he always does. One thing about him, you look into his eyes, you know you have a chance to win the ballgame.” — Hines Ward, on the play of his quarterback.


“What makes it especially frustrating for Browns fans is that the team they follow so passionately actually passed on Roethlisberger in the 2004 draft. With the sixth pick that year, the Browns foolishly took Kellen Winslow Jr., a tight end out of Miami (Fla.). That decision may haunt Cleveland forever.” — Mike Bires, Beaver County Times.


“I didn’t really want him to be flawless coming back. Then, we wouldn’t really have anything to work on. He had a really good game, but he missed a couple of throws that I’m happy he missed.” — Mike Wallace, on Ben’s performance.


“It sounds funny, but it was great to get hit again,” he said. “It was great to do everything — but just to be out there playing.” — Ben.