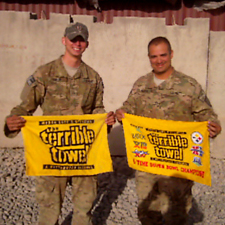 Both are “big time Steeler fans” and can’t wait for this season to start.

PFC Smith is from Pittsburgh, and SSG Rivera is from Arizona.


You can see a larger version of their photo here.

And, an “oldie but goodie” (circa 2007) of Keely Mullen and friends posing with Ben.

Jordan, Zach, Leah, Matt, a baby Ben, and even a dog named “Berger”!

You can see them all here.

He took his offensive line out to lunch and made the mistake of leaving his food behind to make the call!


You can listen to this fun interview here. 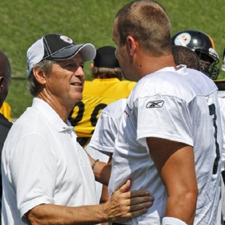 Among the topics that Mr. LeBeau talked about was his close relationship with Ben and how the two of them will sometimes “pick each others brains”.


You can listen to the interview here.

*Thank you Jackie and Trish!

“What they don’t have to worry about: Ben Roethlisberger. He looks as good as ever.” — Gerry Dulac, from his PGPlus Training Camp Observations blog today in the Pittsburgh Post-Gazette.