SI‘s Don Banks,  from his “Inside the NFL” column today: 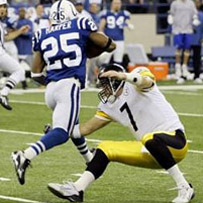 With face-to-face negotiations between the principle figures involved in the NFL’s labor fight scheduled to again resume Thursday in New York, many observers believe the end game to this messy, four-month test of wills and wallets has at last come into view.

“I’d say that back in March, we weren’t in the same stadium,” said one league source of the players and owners. “But if you think of both sides as a team, now we’re in the red zone, we’re driving, we can see the goal line and we have momentum. But can we still screw it up? Absolutely. That’s why tomorrow and Friday are big days, because it’s back to the (negotiating) formula that’s been most successful.”

“It does feel like we’re at the 5-yard line, and we’re right there,” one NFL general manager said Wednesday. “But it’s like Jerome Bettis has the ball, and I’ve seen him fumble on the 1-yard line before. If there’s a fumble now, hopefully either Goodell or Smith plays Ben Roethlisberger and stops the whole thing from falling apart.”


You can read Mr. Banks full column on the negotiations here.


From the Pittsburgh Tribune-Review‘s Scott Brown on the latest Steelers training camp news: 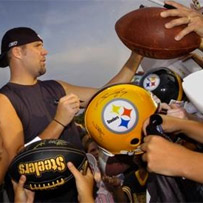 In a sign of guarded optimism that labor peace will soon prevail, the Steelers held an organization-wide meeting Wednesday to talk about training camp.

The Steelers are planning on training at St. Vincent College for the 46th consecutive season. The streak, however, is in jeopardy because of the NFL lockout.

If the start of preseason practice is delayed — and some sort of signing period for free agents and draft picks is almost sure to precede the start of drills — the Steelers could be looking at a shortened camp at St. Vincent.

“With us being a veteran team, I don’t think (not having camp) would kill us,” quarterback Ben Roethlisberger said recently. “But you kind of have to put some of the young guys through all that stuff — training camp and St. Vincent.”


You can read more from Mr. Brown’s column and see video from a recent interview with Ben here.