The Ben Roethlisberger Foundation at work once again

The Ben Roethlisberger Foundation at work once again

“I would just like to keep everyone informed about Pito. Pito is the K9 dog that was given to us by The Ben Roethlisberger Foundation. Since Pito has been on the street, he has made nine ‘small’ hits on drugs and one very large one on Tuesday night. Pito has only been on the streets for about two months since training. As the Chief of Police, I can’t thank The Ben Roethlisberger Foundation enough for all they have done for us. Please thank Mr. Roethlisberger for us, and for helping those who help others.” – Chief Ronnie Williams, Millersville Police Department, in an email to the website today.

That one “very large” hit that Chief Williams referenced in his email was the subject of a story from the WKRN-Channel 2 News in Nashville this evening: 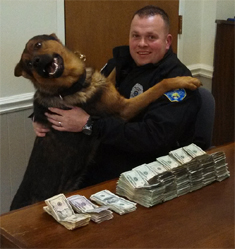 The K9 donated by football star Ben Roethlisberger’s foundation last year is now trained and on the streets, helping the Millersville Police Department sniff out crime.

Hurst pulled over a rental car that had no rear lights and discovered the driver had no license.

Pito sniffed around the car and alerted on something at the driver’s door.

The driver then admitted to having marijuana in possession.

When Hurst led Pito around the rest of the car, he alerted once again at the trunk.

Officer Hurst then discovered $30,500 in cash hidden under a tire.


“It’s been a great experience working with him.” — Officer Hurst, about his new partner.

Police believe the cash was a part of a drug deal that was either about to go down or had just been completed, but the driver and passenger of the rental vehicle said they did not know where it came from.

Since it was not claimed, the cash was confiscated and will now go into the Millersville drug fund to help buy new equipment.

Authorities also said that the male in the passenger seat has a lengthy drug record and was recently released from the penitentiary.

You can read more about Ben’s Foundation here.


*Thank you so much to Chief Williams for the email and the photo of Millersville’s Top Dog!