“I’ll take this one on me.  I need to play better, and I need to get this offense moving. If it’s a duck, it’s a duck. We got our butts kicked.” — Ben, after the game.

Not too much on the positive with this one. No doubt, the Steelers feel like the Patriots did last week after their game against the Browns! Hopefully they got that one ugly game out of their system…. 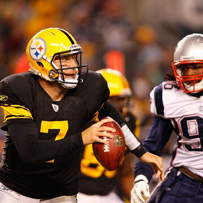 Although the loss to New England was a team-wide failure, credit Roethlisberger for stepping up and taking blame. Roethlisberger had great numbers, throwing for 387 yards and three touchdowns. But it was deceiving because every touchdown and many yards were accumulated during garbage time in the fourth quarter.

New England led 23-3 entering the final period and its defense played safe the rest of the way. Roethlisberger was able to gain yards and score while also running out the clock.

All three of Pittsburgh’s touchdowns came in the fourth quarter, with Roethlisberger (30 of 49, 387 yards) also finding Wallace on scoring passes of 15 and 33 yards.

”We threw some pressures in there. You can’t let Roethlisberger have time. You can’t just send 3 or 4 men. So we had to send more people to try to get him on the ground. He’s a very tough guy to tackle.” — Patriots safety James Sanders (Boston Herald).


“I don’t think they did anything to confuse us, that we didn’t expect. They flat out beat us. It was a good old-fashioned butt-whooping, and you never like it when it’s at home.” — Ben, during his post-game comments. (ESPN.com)