“I can’t imagine what he’s going through and the struggle he and his family are going through, but he saw the love that was out there from his team and from his coaches and the fans and the owners. — Ben, on the support shown for him prior to the game. 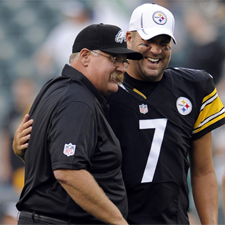 There was an outpouring of empathy and condolences for a father and his family as the 54-year-old coach began working in public through the loss of his eldest son, Garrett, 29, who died Sunday at the team’s training camp site in Bethlehem, Pa.

During the game, from Ed Bouchette, Pittsburgh Post-Gazette: 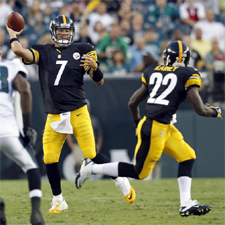 Ben Roethlisberger [7/8 for 49 yards, 0 TD’s, 0 Int] led his new offense to a field goal on the game’s first drive, then turned things over to the backup quarterbacks as the Steelers grabbed a 3-0 lead over the Eagles after one quarter.

After Shaun Suisham kicked a 46-yard field goal on the first series of the game, the Steelers scored two more times in the second quarter.

If you missed the game, you can read the TimesOnline timeline here.

Video highlights can be seen here.

A few photos can be seen here.

“Those are my guys. I think we’ve got a great group of guys who are playing great right now. I think they’re as excited as anybody to get out and bang against other competition.” — Ben, from an interview with WPXI.