In his first game in a new offensive system, Ben Roethlisberger pulled out a few old tricks in his preseason debut Saturday night.

The Pittsburgh Steelers quarterback turned in a vintage performance in three series against the Detroit Lions on Saturday night, completing 8 of 10 attempts for 137 yards and two touchdowns en route to a perfect passer rating.

It was a small sample size, but Saturday night gave the Steelers the first assurances that a partnership between Roethlisberger and new offensive coordinator Matt Canada can work.

Playing like a man with something to prove, Roethlisberger sought to demonstrate his arm strength, heavily scrutinized after the 2019 elbow surgery, is back to normal after a 2020 campaign characterized by short throws.

He only somewhat proved that point, averaging 13.7 yards per attempt with some well-thrown mid-range balls. Others, though, like a 43-yard pass to Diontae Johnson were underthrown. Still, the 39-year-old showed he wasn’t afraid to air it out and stretch the field — and he was mostly successful doing it.

Roethlisberger turned back the clock on the first drive, reminding defenses he can still be the fleet-footed signal caller who can dance away from pressure. He made mobility a point-of-emphasis in his offseason workouts, and on third-and-4, he stepped up in the pocket before spinning out to elude a sack and fired off a pass that sailed about 40 yards in the air to Eric Ebron on the sideline. The tight end couldn’t come down with the combat catch, dropping it under pressure and the Steelers had to punt the ball away on Roethlisberger’s first series in 2021. 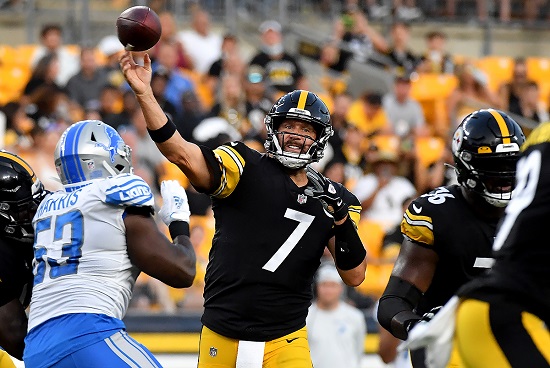 After that, though, Roethlisberger was perfect on third down, completing each of his next four attempts for 71 yards, including two touchdowns to rookie tight end Pat Freiermuth. Roethlisberger hit Diontae Johnson for the 43-yard completion on his second drive and followed it up with an 11-yard completion to JuJu Smith-Schuster on the next third down.

Smith-Schuster looked every part of the reliable third-down weapon, running through contact to pick up the extra yards. Two plays later,Roethlisberger pulled out an old favorite with a pump fake that even fooled television camera operators at Heinz Field, paving the way for Freiermuth to find an opening in the end zone.

Roethlisberger rifled the pass to the rookie for each of their first scores in the preseason. The connection continued to be a strong one as Roethlisberger found Freiermuth again on the next series, capping a four-play scoring drive with six-yard touchdown pass to the Penn State product.

That score was set up by Roethlisberger hitting rookie running back Najee Harris on a crossing route off a play-action pass that went for a massive 46-yard gain up the sideline.

By the time Roethlisberger ceded control of the defense to Mason Rudolph, the Steelers had a 14-0 lead on the Lions, and Roethlisberger had the all-important dry run with Canada completed before the regular season.


You can read more from Ms. Pryor here.


Ben is Digest Player of the Week!

Pat Freiermuth says he and Ben Roethlisberger have actually watched a little bit of Heath Miller tape so that he can pick up on some of what made Miller so good.

How about that pump fake?

So I’m just going to say it… Ben Roethlisberger has the deadliest pumpfake in all of football, of all time.

Ben Roethlisberger just juked every camera person out of their shorts.