Ben was 7/8 for 92 yards in less than two minutes after engineering an 11-play, 98-yard drive during the second quarter, which resulted in a touchdown:


“I called the play, and I can see what’s going on with the [Bills] defense. Guys made great plays – we had a running back make a catch on the sideline like a receiver, we utilized the middle of the field, guys got out of bounds to save us time because we only had one timeout, and we didn’t have to use it until we got all the way down the field. It was a pretty successful drive for us.” — Ben, when asked by NFL Network‘s sideline reporter Kim Jones about “that level” of execution. 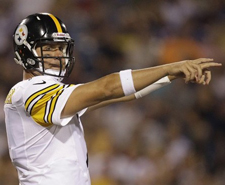 With 15 days to go until his team plays a meaningful game, Ben Roethlisberger already is in regular-season mode.

The Pittsburgh Steelers quarterback sunk a knife into the Buffalo Bills on Saturday night with a two-minute drill for the (preseason) ages.

Starting on Pittsburgh’s 2-yard line with just 1:46 remaining in the first half, Big Ben marched the Steelers on an 11-play, 98-yard drive capped by a 6-yard touchdown strike to Antonio Brown. Roethlisberger was 7-for-8 passing for 92 yards on a frantic run in which Bills coach Chan Gailey seemed to age seven years.


More from Mark Sessler, including video of Ben’s interview here.


If you didn’t get to watch it this evening, NFL Network will replay the game on Monday, August 27th at 4:00 pm AND on Thursday, August 30th at Noon.


“It was big for us because we want to be physical. We pride ourselves on that, the line prides themselves on that. I think Isaac did a great job of pushing it, almost getting in. Then he got a little help from Ramon Foster and he just dragged him right in.” — Ben to NFL Network sideline reporter Kim Jones on ‘winning the battle’ at the line of scrimmage for the first touchdown.

You can read more of Ben’s post-game quotes here.