“It’s still another performance, in my opinion, where I’m happy that we scored but I still am a little disappointed that we haven’t done as well as I think we should have.” — Ben, during his post-game comments.

Ben  completed 11-of-16 passes for 214 yards and two touchdowns, as the Steelers took down the Atlanta Falcons 34-16 tonight. 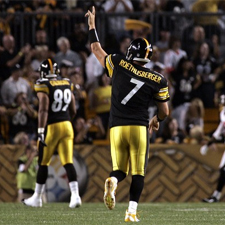 Antonio Brown caught both of Ben’s touchdown passes – 77 yards and 44 yards. He had four catches for 137 yards.

Crezdon Butler returned an interception 95 yards for a touchdown in the victory.

The news was not all good for the Steelers though – both Byron Leftwich and Maurkice Pouncey left with injuries. Pouncey suffered a left ankle injury early in the game, and Leftwich left with a broken left arm.

Late in the third quarter, Leftwich scrambled to his right for six yards. Atlanta linebacker Stephen Nicholas took him down and Leftwich landed on the turf awkwardly. He got up holding his left arm down at his side.

In addition to playing well once again, Roethlisberger continues to say the kinds of things that leaders are supposed to say. When asked to assess the offense’s performance during a first half in which it scored 24 points, Roethlisberger said, “It’s still another performance, in my opinion, where I’m happy that we scored but I still am a little disappointed that we haven’t done as well as I think we should have. We had a couple breakdowns, some different things here and there that have stalled us as an offense. I feel like we’re doing some good things, but we’ve still got some work to do. That’s a good thing. I’d rather do that than be 100 percent right.”


You can read more from Mr. Labriola’s post-game report here.

In Cincinnati, new offensive coordinator Jay Gruden started from scratch about a month ago with rookie quarterback Andy Dalton.

Here, veteran offensive coordinator Bruce Arians has reached the point where he believes eighth-year quarterback Ben Roethlisberger — who connected with Antonio Brown on touchdowns of 77 and 44 yards in the second quarter — could run the offense without him.

“I would feel comfortable with him going out and calling the plays in all phases, not just the spread offense,” Arians said. “The only question is how he would substitute players without signals.

“Yeah, he could take a game plan and execute it perfectly right now.”


You can read more from Mr. Starkey’s column here.

Video of some of the game’s highlights here.

Photos from the game here.