The media isn’t exaggerating when they say that Steelers fans “travel well”. They travel far too!

Roger Saucedo and his Steelers Mexico Fan Club, Regios de Acero, were on the move again….this time it was a 20-hour bus trip to Atlanta to see their beloved Steelers play the Falcons at the Georgia Dome last Sunday. 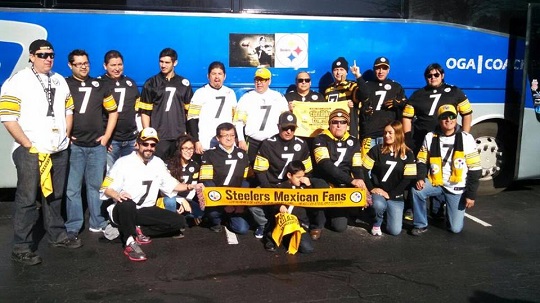 Why yes, there ARE quite a few Big Ben fans within the Regios de Acero Fan Club!


You may remember, they came to Pittsburgh last year to see the Steelers play at home.

The team won that time…and they won THIS time. Obviously having Regios de Acero in the house, whether at home or on the road, is VERY good luck!

Roger wanted to share the story of their trip to Atlanta with Steeler Nation:

December 11th, Thursday, 7:00 am – 85 people ready to board the buses that take us once again to another NFL stadium to support our team: a 2014 appointment is Atlanta, GA. It would be 20 hours trip from Monterrey, but doesn’t matter because all we wanted is to be in the Georgia Dome waving our Terrible Towels and support the Steelers.

Friday – We finally arrived to our hotel in Atlanta. We were tired but our love for the Steelers is bigger than any fatigue. After resting in the hotel, we went out that evening in our Steelers jerseys to downtown Atlanta. Some went to dinner, others went to a basketball game in the Phillips Arena, but at the same time all together to tell to the Falcons fans: we are here, we are the Steeler Nation!

Saturday morning – After breakfast we went to downtown to visit some places of interest, like the World of Coca Cola, the Aquarium, the Hall of Fame … we had a good time especially because we saw more Steelers fans, and because the local people were surprised to see them too: lot of fans wearing the Steelers jerseys in the territory of Atlanta Falcons.

Sunday, game day! We arrived early at the Georgia Dome area, and we were happy to see that the streets were full of fans wearing black and gold! Inside the stadium we felt proud to see that we were thousands of fans waving Terrible Towels, we are sure that our team feels like home. It was a very exciting game! We were lucky because we not only saw the Steelers win the game but also was the day that Ben and his teammates, Brown and Bell, set new franchise records! yeah, it was a great day!! At the end of the game we started the journey back to Monterrey, Mx. – another trip of 20 hours, but it was worth it because Big Ben Roethlisberger and our Steelers gave us a great game! 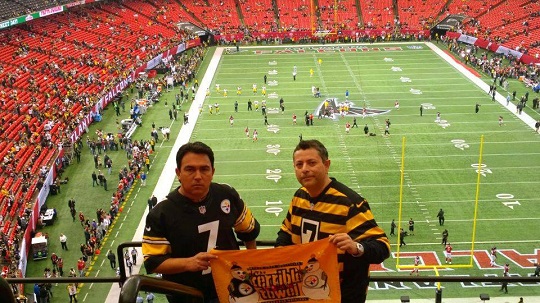 Roger, thank you and Regios de Acero for sending the photos and your story!!

One of our favorite “website photographers” was at the Georgia Dome on Sunday as well!

Now Dr. Ronald Cypher didn’t travel quite 20 hours, but he and his wife Deb did make the trip from Pittsburgh – luckily for us, he took his camera along. 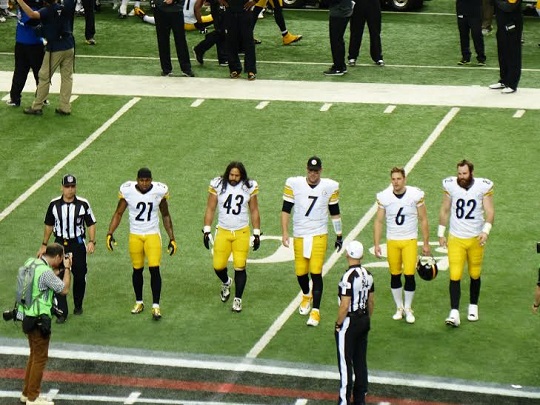 Great shot of the Captains walking out to the center of the field for the coin toss. 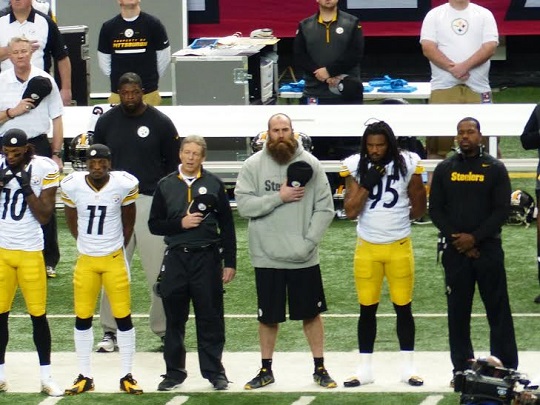 The Steelers D and Coach Lebeau stand at attention during our National Anthem.


You can see more of his photos in Ben’s Fans Capture the Action album!