RJ’s father, Johnny Dabovich, sent photos of the jeep that he not only restored but had painted with an incredible Steelers mural done by artist Kenny Banks in Colorado! 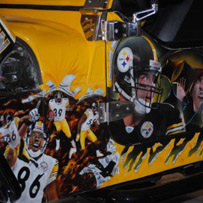 I’ve been a Steelers fan since the age of 7, I’m now 44. Growing up in New Mexico and now living in Colorado, it’s hard to collect anything with ‘Steelers’ on it. So when I had the chance to paint a vehicle black and gold I jumped on it.

My 11-year old son RJ is a huge fan of Ben, His entire room is covered with Steelers memorabilia. We went to Pittsburgh to watch the AFC Championship game but RJ was bummed he didn’t get to ever meet a player, hopefully will get out there again during training camp so he can meet Ben or other players.

RJ would be pumped if he knew Ben saw his jeep.

I restored the jeep to have fun in the mountains and go off road, when it was complete I asked Kenny Banks to put a mural on the hood and some kind of a pattern down the side. He said he always wanted to do something big but he always had to paint what the customer wanted and nobody would have the patience to complete a big project. I told him that as long as it had something to do with the Steelers he could run with his idea.

So 18-months later, this is what the final project looks like. I always joke with Kenny that he ruined my jeep, cause now it just sits in the garage.

The pictures really don’t do it justice. It won a car show here in Pueblo for best of show first time out. Most people see it for what it is and complement it, but there are those dumb Bronco fans that mock it.


You can see more photos of Johnny (and RJ’s) jeep here.

*Thank you to both Johnny and RJ!