“Ben’s performance was absolutely unbelievable. And the fact they were one play away from tying the game tells you a heck of a lot about his competitiveness and toughness and his ability to make plays. But he’s not lasting the season if they don’t shore up that left tackle spot. It’s that simple.” — Bill Polian, from the article below. 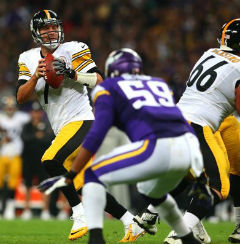 Bill Polian, a six-time NFL executive of the year, recently saw one of the greatest quarterbacking performances he’s witnessed during more than a half-century of football watching.

He called it “phenomenal” and “unbelievable.”

No, an under-siege Ben Roethlisberger’s play as he nearly rallied the Steelers from a 17-point deficit in the fourth quarter during their 34-27 loss to the Vikings in London last Sunday.

Polian marveled at how Roethlisberger completed 36 of 51 passes for 383 yards, one touchdown and one interception in London despite being forced to improvise on nearly every play behind an offensive line that could barely protect him.

“Ben Roethlisberger put on the greatest single individual display, south of Peyton Manning and Tom Brady and Drew Brees, that I have seen in a long time — maybe in my entire career,” said Polian, who drafted Manning with the Colts 15 years ago.

“He was just phenomenal,” Polian said. “He avoided or shrugged off at least four sacks. He made plays down the field that were unbelievable, and he was under duress all night from snap 1.