“Roethlisberger has been Steelers’ constant amid change”

Home/News/“Roethlisberger has been Steelers’ constant amid change”
Previous Next

“Roethlisberger has been Steelers’ constant amid change” 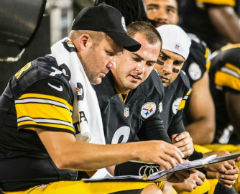 Ben Roethlisberger not only played in every game for only the second time in his 10-year career, but he also played every snap for the first time (though not all at quarterback because they used the wildcat on occasion).

So, having turned 32 March 2, it’s probably time for Steelers fans to stop fretting about his health. He’s fine. His knees are fine, his head is clear and his arm is as good as ever.

Operating behind what often was a makeshift line, Roethlisberger had another strong season. His 4,346 passing yards and 28 touchdown passes were second most in team history — records he owns. He set team records with 375 completions on 584 attempts. He increased his team record to 34,105 career yards.

“What we have to do is surround him with the best talent,” general manager Kevin Colbert said. “And he has to play to that level that he’s capable of playing to if we do get that talent around him. We all have to come together to try to win the Super Bowl. But we understand that there are only so many snaps left with a franchise quarterback.”

The Steelers want to ride Roethlisberger as far and as long as he will take them.

“In regards to Ben and his window closing, I think first of all we’re very fortunate to have a franchise quarterback because the majority of the teams in this league can’t say that and we have one,” Colbert said. “There is nobody we’d rather have than Ben. That’s a big part of where we are. As an organization we have to, and we realize that he doesn’t have 10 years left. We all would acknowledge that. Does he have two, three or five? I don’t know. Hopefully he stays healthy and we get the maximum amount of years out of him.”


You can read more from Mr. Bouchette’s Sunday column here.