“It’s amazing the good things that happen to you when you grow up a little.” — Ben

From Mr. Cook’s interview with Ben for the Pittsburgh Post-Gazette: 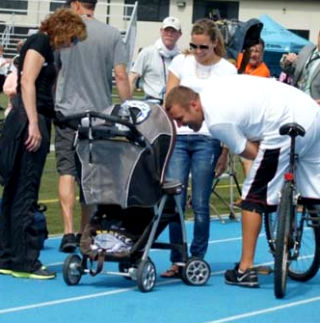 On Sunday, Ben Roethlisberger did what he does best as an elite NFL quarterback, throwing for two touchdowns and running for another, leading the Steelers to an unlikely, season-sustaining win against the Green Bay Packers at Lambeau Field.

But on this Thursday night, he is at his North Hills home, doing some nice work as a father, changing a dirty diaper. Wife Ashley is off to the Penguins-Minnesota Wild game, the highlight of a girls night out. Roethlisberger is alone with Ben Jr., who turned 1 Nov. 21. The two are having a blast. Roethlisberger does the diaper thing with the same precision he threw the touchdown pass to Santonio Holmes to win Super Bowl XLIII.

“I love being a father,” Roethlisberger said. “I love the responsibility. I love the patience it teaches you.”

It makes for a wonderful holiday picture, Roethlisberger, such a big man, holding that baby boy in his arms. Soon, there will be another face in the family team photo. The Roethlisbergers are expecting a girl in March.

You think the Steelers might be on the verge of an amazing comeback, from an 0-4 start this season to a spot in the playoffs? The team has nothing on Roethlisberger, who has climbed out of a much deeper, darker hole. Wasn’t it just yesterday that NFL commissioner Roger Goodell suspended him for conduct detrimental to the league? Now, Roethlisberger is a finalist — one of 32 — for the NFL’s most prestigious annual honor, the Walter Payton Award.

He is the Steelers’ nominee, not just because he’s having, arguably, the best season of his career, but because of his community service. The award celebrates what really is important. Former Steelers Franco Harris, Joe Greene, Lynn Swann and Jerome Bettis won it, as did former Pitt and Miami Dolphins quarterback Dan Marino. The Payton Award will be presented at Super Bowl XLVIII Feb. 2 in New Jersey.

“I knew who I was and how I was raised,” Roethlisberger said. “I also knew who I wasn’t, if that makes any sense. I knew I could get to where I am today because I knew the type of person I wanted to be.”

Roethlisberger called it a “challenging journey,” not just saving his football career but also winning back the respect of his bosses, teammates and fans. It didn’t happen overnight. He learned about patience long before Ben Jr. came along. But Roethlisberger kept working at it, one day at a time…


You can read the rest of his interview with Mr. Cook here.