Starting the offseason workouts on the right foot

Starting the offseason workouts on the right foot

…and the right frame of mind! 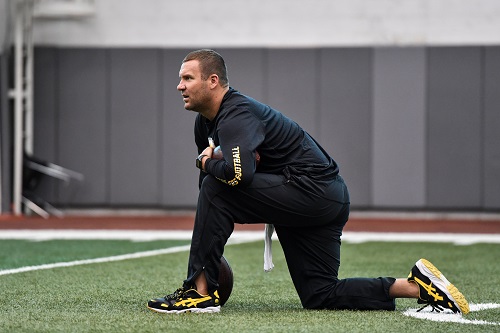 While Monday was the first official day of Phase One of the offseason program, Tuesday is when things really kicked into gear for the Steelers with the day starting with a team meeting.

And it was a packed house at the UPMC Rooney Sports Complex.

“It’s fun to be here first and foremost,” said Ben Roethlisberger. “It’s fun to be out there throwing with the guys. I haven’t thrown a football since the last game of the year, so to be able to get out and get some work with new guys, and guys who have been here, it’s fun first.”

The meeting, and the entire offseason program with the exception of minicamp, are all voluntary and the turnout has been top notch. Roethlisberger, Maurkice Pouncey and Cam Heyward, as well as other veterans such as Vince Williams, Alejandro Villanueva, Sean Davis and countless others, were all there showing their commitment.

“I expect nothing else,” said Roethlisberger.

Having the veterans there has a big impact on the younger players on the roster.

“It’s important right now,” said JuJu Smith-Schuster. “The more time we spend together, the more we can build that trust we have with each other and team building.

James Conner, who spent part of his offseason working out in the Pitt weight room with Aaron Donald, was energized to be back and focused on getting ready for the season ahead.

“Seeing the young guys, the older guys. It’s great to be back,” said Conner. “You miss it. Everybody likes their free time, but there is nothing like building that camaraderie and being all together.

“And seeing all the veterans here, it shows the focus those guys have and the dedication those guys have to this team, their craft, and the job. Guys don’t have to be here, but they are still here. They like seeing the guys too. Being around this bond we have. It’s great to see the older guys.”


You can read more from Ms. Varley’s interviews here.