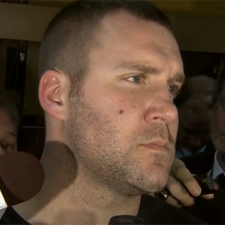 What was going through your mind immediately after the loss?

Disappointment, pain, letting a lot of people down and that doesn’t feel good! I need to play better!

We’ve just got to do better, we’ve got to move the ball and stop getting behind the chains and making it hard on ourselves.


On what he thought the problem was –

It was hard to really get going. We never make excuses, we’ve had a lot of injuries to deal with, but something we’ve always done well is fill in, and we did things…we had a chance to win the game, but I blew it.


On the play of his offensive line –

I feel that we have a lot of really good guys out there on offense, they played well. They need more play and better play from the quarterback.


Can you believe that the Steelers will not be going to playoffs this season?

We should be, if it wasn’t for me.

You can watch video of Larry Foote’s interviews here.