From Will Graves, AP: 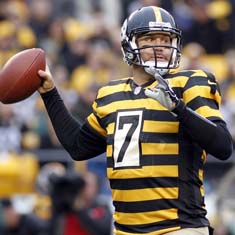 Wearing throwback jerseys that made them resemble hulking bumblebees, the Steelers swarmed Washington’s precocious star in a 27-12 victory on Sunday.

The Steelers (4-3) improved to 14-1 against rookie quarterbacks since 2004, doing to Griffin what they’ve done to the likes of Eli Manning and Joe Flacco.

Ben Roethlisberger had no such issues against Washington’s depleted defense, throwing for 222 yards and three touchdowns as the Steelers won consecutive games for the first time this season.


“Ben says, ‘Not so fast young man, I’m pretty good too!'”. — FOX NFL Sunday‘s Howie Long on what Ben was thinking after the first half.

Jonathan Dwyer added 107 yards rushing in his second NFL start while Heath Miller caught four passes for 46 yards and his sixth touchdown of the season. Pittsburgh scored on its first four possessions to take control early and had little trouble moving above .500.

Suddenly, the team that looked sluggish during early losses to Oakland and Tennessee appears to be its normal, dangerous self in a wide-open AFC.


“Anytime we can mix it up and be balanced, and we’ve always said that’s what we want to be – a balanced offense, and I feel like we’re doing that right now.” — Ben.

You can read more from Mr. Graves on the win here.

Ben completed 73 percent of his attempts and threw three touchdown passes without an interception for a 124.3 passer rating.

– Ben Roethlisberger is the best QB on 3rd down this season with a league high 97.3 total QBR. No other quarterback has a QBR above 83.2.

– Ben Roethlisberger’s extraordinary record when starting against a rookie QB is 14-0. He has thrown 20 TD passes and only seven interceptions in those 14 games, and his victims have included Eli Manning, Joe Flacco (twice), and Andy Dalton (twice).

Congratulations to Jonathan Dwyer, Steelers Digest Player of the Week!