“It’s just fun to get everyone involved. I still don’t think we are there. I think we are getting closer. There are still some things we can do to get better but that is good. It is early in the year still and we need to make those improvements. We don’t want to be just clicking at 100 percent now. We want to be winning games and moving forward.” — Ben, post-game. 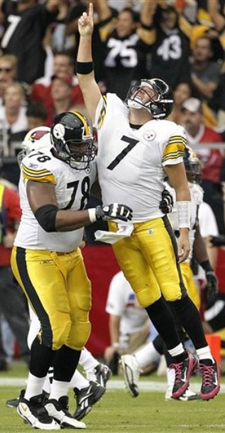 In the long history of the Pittsburgh Steelers, there has never been a pass like it, and the play set the tone for a big day.

Roethlisberger, 26 of 39 for 361 yards, also had TD passes of 12 yards to Heath Miller and 4 yards to Emmanuel Sanders in the first game between the teams since Pittsburgh’s 27-23 thriller over the Cardinals in the 2009 Super Bowl.

Shaun Suisham kicked field goals of 41, 42 and 39 yards for the Steelers.

The big play from Roethlisberger to Wallace, cheered on by a crowd that included a generous and boisterous bunch of Steelers fans, came in the second quarter after an Arizona drive stalled at the Steelers 39 and Dave Zastudil’s 30-yard punt pinned Pittsburgh on its 9-yard line. A false start pushed it back to the Steelers 5.

On the next play, Roethlisberger dropped back into the Pittsburgh end zone and lofted a pass down the sideline toward Wallace, who had beaten cornerback Richard Marshall.

Wallace caught the ball in stride, breaking free of a pair of would-be tacklers along the way, and raced to the end zone for the score that made it 14-0 with 8:09 left in the half.


“You put it out there for a guy like that and you start smiling. because you know he is not going to get caught.” — Ben, talking about Mike Wallace.

The previous longest pass play was 90 yards, first set by Terry Bradshaw against Seattle in 1981, then matched by Bubby Brister to Dwight Stone against Denver in 1990 and Kordell Stewart to Bobby Shaw against Baltimore in 2001.

It was the second-longest play from scrimmage ever for the Pittsburgh franchise. Only Bobby Gage’s 97-yard run against Chicago in 1949 was longer.


“I went to the offense and said, ‘Hey listen guys, they’re going to have a spark. Let’s go back to using the silent count and let’s just go answer and do what we do.’ I know I don’t need to say much to these guys to get them going.” — Ben, on what he said to his offensive line when the Cardinals crept to within three points in the third quarter.

You can read more from CBS’s recap here.

You can view video of game highlights here.

You can listen to Ben’s post-game interview on DVE here.

Post-Game Quote of the Day:

“The Cards were able to get pressure via their defensive line and linebackers on Ben Roethlisberger, but pressure is just not enough when dealing with him. He was able to evade tackles and make plays, converting huge first downs all day long. Arizona showed no ability to tackle and they acted as if they were just playing a regular quarterback that simply goes down from a bump.” — Tyler Nickel, SB Nation’s “Revenge of the Birds”. 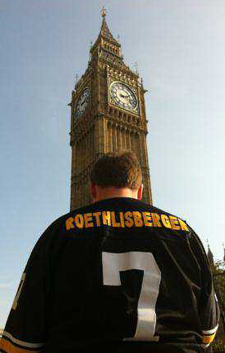 From ESPN.com on British fans who came out for the NFL’s game at Wembley Stadium:

Despite the Bears and Buccaneers being the featured teams, pretty much every club in the NFL is represented by way of the jerseys they’re sporting on the walk into the stadium.

But the fans broke out some throwbacks, too. Anyone remember former Bears receiver Marcus Robinson? How about former Bengals receiver Darnay Scott or Wayne Chrebet?