“We did a little play-action and I just let it fly.” — Ben, on the touchdown pass to Martavis Bryant. 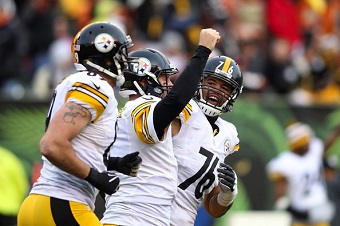 The only fans left at Paul Brown Stadium in the final minutes were the ones twirling those yellow towels and celebrating another significant Steelers victory in December.

This one was bigger than most.

Ben Roethlisberger and Le’Veon Bell came up big in a game that Pittsburgh had to win Sunday, leading the Steelers to a 42-21 drubbing of the Cincinnati Bengals that left the AFC North race wide open.

Roethlisberger threw three touchdown passes, including a 94-yarder to rookie Martavis Bryant, and Bell scored three times as the Steelers (8-5) ran away by scoring 25 points in the fourth quarter.

Now, it’s a four-way race to the top.

Bell steadied Pittsburgh’s offense by running for 185 yards, catching six passes for 50 yards and scoring three touchdowns in the second half. He became the sixth player in NFL history to have 200 all-purpose yards in three straight games.

“We ran the same play three or four times in a row and those guys just couldn’t stop it,” Bell said.

Roethlisberger emerged from a three-game funk by making big plays as well, including the longest touchdown pass in the NFL this season. Up by eight points and backed up on its 6-yard line, Pittsburgh decided to fake a handoff and let Roethlisberger drop into his end zone and throw deep.

Bryant ran past cornerback Leon Hall and caught the ball in stride along the right sideline, reaching the end zone untouched.

“We did a little play-action and I just let it fly,” said Roethlisberger, who was 25 of 39 for 350 yards. “I’ve underthrown him in practice because when he gets running, he’s fast. I just put it out there, let him run under it, and he did the rest.”

And you can check out his highlights here, a few photos here.

“It was a lot of fun out there. It was a hard-fought game, it was far from easy. We expect that from those guys. We’ll see them in a couple of weeks.” — Ben 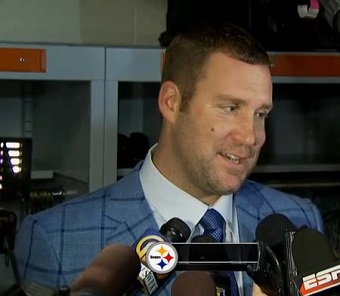 Ben Roethlisberger owns this slice of real estate in southwest Ohio, has for more than a decade. He welcomed new partners to the firm of Burst the Bengals Bubble Sunday as the Steelers tightened the race in the AFC North Division like a tourniquet.

Roethlisberger, his play more like that against the Colts and Ravens at home more than a month ago, put on quite the show in the Steelers’ 42-21 victory. He threw for 350 yards, three touchdowns and no interceptions or sacks. But then, he is used to doing that here as he ran his record in Paul Brown Stadium to 9-2.

He was not even the star of the game. That belonged to Le’Veon Bell, who rushed for 185 yards and two touchdowns, and caught six passes for 50 yards and a third touchdown in his first appearance here (after missing a loss a year ago in the second game).

Close behind Bell was Antonio Brown, who caught nine passes for 117 yards. Then there was rookie Martavis Bryant, who emerged from a mini-slump in a big way. He caught four passes for 109 yards in his first game here, including a 94-yard touchdown midway through the fourth quarter that put the game away, 35-21. The Steelers scored 25 points to the Bengals’ none in the fourth quarter of what had been a back-and-forth game.

The lopsided victory — after the Steelers stumbled through the previous three games at 1-2 — may have come as a surprise, but not to Roethlisberger. He found great success playing at nearby Miami University in Oxford, Ohio, and he has turned Cincinnati into his vacation home.

“Ohio is home. I love coming back,” said Roethlisberger, who grew up near Toledo. “I just felt … like it was a day in [Oxford].”