“This is one step to what we hope is the ultimate…we love to win the division, especially this division, because it’s a hard division to win. We hope this is just the beginning.” — Ben, to reporters after the game. 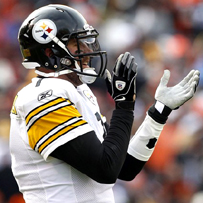 The Steelers (12-4) clinched the AFC North division title and a first-round bye for the second time in three years. Pittsburgh holds the No. 2 seed and would only have to play on the road at New England if both of those teams play in the AFC title game.

The Steelers return to the playoffs for the first time since winning the Super Bowl following the 2008 season. Pittsburgh will play the highest seed from the wild-card round.

Roethlisberger threw two touchdown passes as the Steelers geared up for another Super Bowl run by winning their division and securing a first-round playoff bye with a 41-9 win Sunday over Cleveland. He finished 15 of 22 for 280 yards and has gone 158 consecutive attempts without throwing an interception, the longest streak of his career.

In winning its third division title in four years, Pittsburgh guaranteed itself at least one postseason home game.

Roethlisberger, who got to rest most of the second half, threw a 56-yard TD to Mike Wallace on his first pass. The Steelers (11-5) built a 31-3 halftime lead and rocked the rival Browns (5-11).

The Steelers were in control throughout the regular season finale, scoring on all six possessions with Roethlisberger under center.

Troy Polamalu, returned from a two-game absence and made an immediate impact with an interception on the second play from scrimmage. On the next snap, Wallace got behind the secondary and hauled in Roethlisberger’s 56-yard bomb for an early lead that was quickly extended.

Wallace’s 41-yard catch and run highlighted a 10-play, 71-yard march that Mendenhall capped with a one-yard run with 6:57 left in the opening quarter.

Pittsburgh continued to impose its will on offense on the ensuing possession, which ended in another Mendenhall one-yard romp for a 21-3 cushion.

McCoy was intercepted on Cleveland’s next two drives. The Steelers converted the first turnover into Heath Miller’s four-yard touchdown reception and the second into Shaun Suisham’s 41-yard field goal for a 31-3 halftime lead.

Pittsburgh held the ball for the first 7:42 of the third and scored on a trick play near the goal line. On third down from three, Antwaan Randle El took an end around pitch, changed direction behind the line of scrimmage and threw back to an uncovered Hines Ward in the right corner of the end zone.

With the outcome no longer in doubt, Byron Leftwich relieved Roethlisberger for the rest of the game. 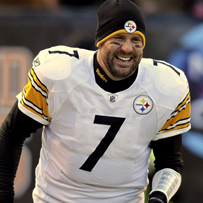 
“Ben came through adversity. He stepped up, not that he hasn’t in the past. But this season didn’t start like other seasons.” — Hines Ward.


“We knew we had a lot riding on this game. Our whole season came down to this. All of our goals hinged on this. We knew we had to take care of business.” — Heath Miller.


“Everybody knew what was on the line. There was no let-up on this one.” — James Farrior.


“We just like to play football. You’re never going to see us on Hard Knocks. There’s no TV stars in here. We got one guy with a commercial; that’s just because he has nice hair.” — Ryan Clark.


“The biggest turning point of the game was that pick. We never looked back after that.” — Brett Keisel.


“It helps when you score on the first offensive play. I’m really proud of how the guys played. We had a lot of guys step up. We talk about total team wins; I think this is what you talk about.” — Ben.


You can see highlights of the interviews here.


You can watch video of Coach Tomlin congratulating his team here.


You can watch game highlights here.


You can check out a few game photos here.

Ben finishes the regular season with the third best quarterback rating (96.98) in the AFC, behind only Tom Brady and Philip Rivers…and that was after missing four games!


Ben is also the Steelers Digest Player of the Week! You can read more here.

*Thanks to Becky and Trish!