Steelers’ Ben Roethlisberger doesn’t ‘really care’ about elite QB debate, even if he is one

Home/News/Steelers’ Ben Roethlisberger doesn’t ‘really care’ about elite QB debate, even if he is one
Previous Next

Steelers’ Ben Roethlisberger doesn’t ‘really care’ about elite QB debate, even if he is one 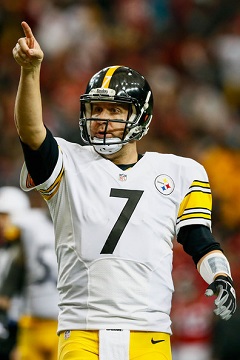 Ben Roethlisberger has never concerned himself with personal accolades. Yet the footprint of his ever-expanding legacy will only take on new dimensions when the Pittsburgh Steelers quarterback reports for training camp with his teammates in Latrobe, Pa., this weekend.

And as he assumes the mantle of the longest-serving member of the Steelers roster for the first time in his career, Roethlisberger may also finally be breaking into that elusive club of truly elite NFL quarterbacks.

But Big Ben will tell you none of it is a big deal.

“For me, it’s always about winning. That’s always been my M.O.,” Roethlisberger, 33, told USA TODAY Sports. “People ask me all the time about what do I think about not being one of the five elites or the three elites or whatever it is.

“I don’t really care. As long as I can win football games and win championships, that’s all that really matters to me. At the end of the day, to me, that’s what you’re based on.”

He certainly has a solid base. February will mark the 10-year anniversary of the Steelers’ Super Bowl XL victory when Roethlisberger, then 23, became the youngest starting quarterback to win the Lombardi Trophy. Three years later, he added a second ring and narrowly missed a third when the team fell short against the Green Bay Packers in Super Bowl XLV.

Roethlisberger also may have sparked a seismic shift in the way NFL teams treat young quarterbacks.

After being thrust into the lineup early in his rookie year for injured starter Tommy Maddox, Roethlisberger proceeded to go 13-0 in the 2004 regular season, won his first playoff start and took the Steelers all the way to the AFC Championship Game a year after they’d gone 6-10 with most of the same key personnel.

He became the first quarterback to earn AP offensive rookie of the year honors.

“Before, it used to be throw them into the fire, see what happens and hopefully you win some games. And then he comes out the gate undefeated. So when people now figure out what that bar is, they always look at him and say, ‘Well if Ben can do it, why can’t we do it?’ — which is unfair to a lot of young quarterbacks.”